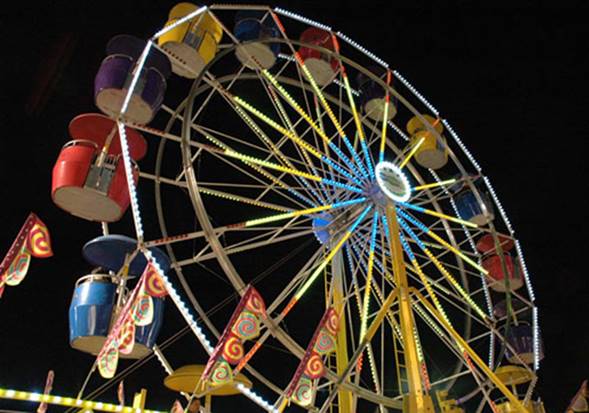 r This year, Art City Days will welcome a new carnival to its downtown area. Brown’s Amusements, out of Mesa, Arizona, will provide a wide variety of rides for both youngsters and thrill enthusiasts from June 7 to June 10 at the Civic Center Park, 110 S. Main. A midway will also be available along with plenty of carnival food.

Brown’s Amusements is owned and operated by Sherry and Danny Brown. They built the company with many hours of hard work and perseverance. Sherry and Danny grew up in the amusement business and spent a lot of time learning from the best. The couple says they were fortunate enough to have spent many years on the road with some of the industry’s best operators. With that experience behind them, they decided it was time to branch out on their own and make a name for themselves.

In 2007, 2010 and again in 2015, Brown’s Amusements was awarded the prestigious Outdoor Amusements Business Association’s Circle of Excellence award. This award is based upon a show’s ability to excel in the areas of safety, service, operations and administrative duties. Shows are inspected by a team of independent consultants for the OABA who review all the show’s internal operational books, safety records and daily operations for two days.

Brown’s Amusements is one of only four carnivals on the West Coast to have the honor of saying it is part of the Circle of Excellence family. It is a difficult award to receive and those obtaining it are re-certified every two to five years.

The Browns strive to maintain the best-possible midway anywhere. The Browns thoroughly inspect every ride at each event and put a lot of time into training their staff. The Browns’ motto, “Team Effort,” is apparent throughout the midway. Every employee is trained from day one that it’s a team effort and they can rely on one another to get the job done. They have a comprehensive employee training program that ensures their employees will be properly trained and educated. Their attention to detail has helped build its impressive reputation amongst its peers. Brown’s Amusements is currently a member of many industry associations such as the Arizona Fairs Association, the OABA, the Rocky Mountain Fairs Association, the Showmen’s League of America and many more.