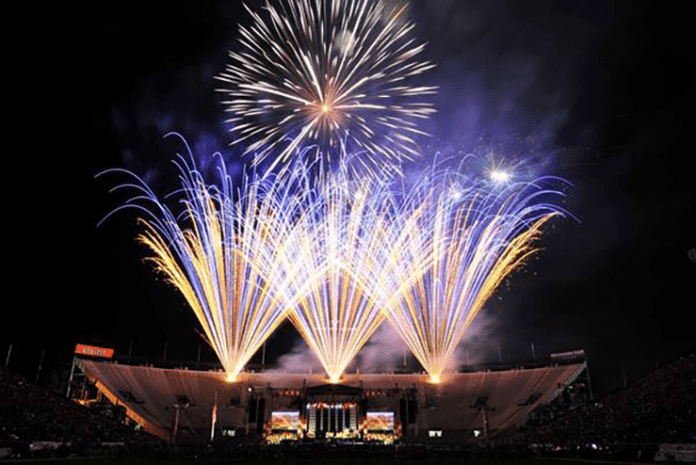 “We are going to paint the sky from the floor to the ceiling with every color imaginable,” said Steve Shriber, president of Firestorm Pyrotechnics. “Everybody will be staring in slack-jawed wonder, I can tell you that.”

The Art City Days fireworks show will be launched immediately following the free family concert on Saturday, June 10, at the Spring Acres Arts Park, 700 South 1300 East, Springville. Performing that night will be Radical Revolution, a band specializing in the hits of the 1980s. The concert will begin at 8 p.m. and the fireworks will begin at 10 p.m.

Shriber said Firestorm Pyrotechnics, located at 187 E. 400 South in Springville, is the only fireworks company in the country that launches only computer-choreographed shows. Other companies may use computers for their larger shows, but Firestorm brings this expertise to every show it does.

Local residents have seen Firestorm’s work at the American’s Freedom Festival at Provo’s Stadium of Fire, Mapleton City’s July 24th celebration and the Payson Golden Onion Days celebration. The company launches fireworks shows across the country, however; it is booked every weekend this year from the last weekend in May through October.

It was the Stadium of Fire that originally got Shriber into the fireworks business. He came to Utah to go to school and got hired to work at the Stadium of Fire event building set pieces. During his second year, he was promoted to be production manager. “I was always interested in energetic materials, but that really sparked my interest,” he said.

He continued working for the Stadium of Fire while going to school, then graduated and went to work for an aerospace company. On the side, however, he was shooting fireworks for various clients all over the world. He became known for his skill in choreographing fireworks shows to music using the computer.

His best friend Jeff Hendrix had helped design and launch the shows since they began working in fireworks and the Stadium of Fire in 1992. In 2006, they partnered with Dr. Brian Trapnell and Richard Ballantyne and formed the company Firestorm Pyrotechnics. Shriber and Hendrix designed the firing system their company uses, which is completely computer controlled and wireless. After being in business about two years, Firestorm purchased the company that had done fireworks for the Stadium of Fire for 30 years, and the company has continued to grow ever since. “This year is our biggest year ever,” Shriber said.

The company imports their fireworks from all over the world, sending out representatives to various countries to meet with manufacturers and review their products. “We try to get the latest and greatest and safest innovations in the industry,” he said. With the many regulations and requirements attached to transporting fireworks, getting them to Utah from around the world is a complex endeavor. It’s a huge challenge, but Firestorm is now an expert at it. Still, it can take up to two years from the time an order is placed to the moment when a shell is launched and lights up the sky, Shriber said.

Operation Never Give Up