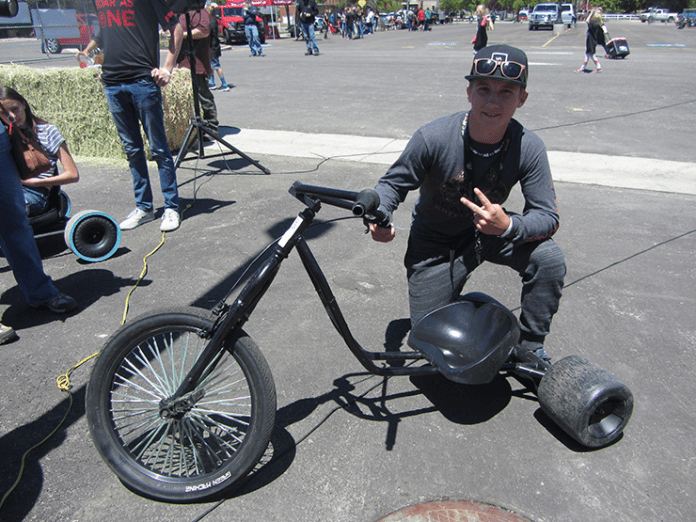 r More than 200 students from 18 high schools participated in the second annual statewide High School Welding Expo on May 20 at the Spanish Fork Fairgrounds.r“We do this to show people in the community how much welding there is in this county and state,” said Brian Ostler, a Springville High School teacher who instructs 210 students in welding, including 20 girls. “We try to show jobs are available in welding, that there are other things students can do besides college.”

About 70 percent of high school graduates in Utah go to an academic college, but fewer than 30 percent graduate, Ostler said, and having a college degree does not guarantee employment.

Welding students can garner $14 to $20 an hour fresh out of high school and upwards of $100,000 a year if they are willing to travel as a pipefitter. “There’s a lot of work on pipe right now in North Dakota,” Ostler said.

Within five years of graduating, one of his students was making $120,000 a year for a Utah County firm when he was promoted to become the company’s vice president.

Welders use an electrode to meld together two pieces of steel or aluminum. A welder might weld on any of the four sides of a piece of metal. Pipefitters are welders who work on circular metal – essentially all four sides at once.

Fabrication projects displayed at the expo showed right- and left-handed students can be equally adept at welding. Flowers crafted from sheet metal were in abundance; a set of them cascaded around a pair of steel antlers in an original design by Provo High School senior and concurrent MATC freshman Kelsha Maier. Now in her fourth year as a welder, Maier got into welding because her dad does some as part of his job, and she plans to open her own business in creative welding. Maier’s sister Jocelyn, 15, is in her first year as a welder.

It was the handcrafted motorized vehicles that garnered the most attention at the High School Welding Expo: 58 motorized drift trikes, 42 rat rods with unique features, 50 drag bikes and 20 pedal-powered drift trikes.

“I wanted to learn how to fabricate a drift trike,” said Nate Thornock, 15, of Salem Hills High School. “It was fun!” He said it took about two weeks, 10 hours total work time, to build his trike, which took first place in the Pedal Powered category.rThornock said he learned to “measure twice and cut once,” and “if (the drift trike) is shorter and smaller, it will drift faster, and if you build the pedals into the wheel, it goes faster.”

In addition to fabrication and racing in five categories, the High School Welding Expo included displays by welding companies, Mountainlands Applied Technical College and the Marines.

“If they can weld to where the bend specimens don’t break, they pass,” said Jacob Westover, an MATC instructor, using guidelines set by the American Welding Society.

Expo committee members include Ostler, Black, Andy Neeves of Salem Hills High School, Jared Massic of Maple Mountain High School, Riley Hallam of Mountain View and Orem high schools, Kaleb Monney of Provo High School and Nyle Russell of Payson High School. J. Merrill Hallam, a biology teacher at Spanish Fork Junior High School, acts as the Nebo School District liaison between the welding teachers and the district’s Career Technical Education.r“We would like to thank all our sponsors,” Ostler said. “They donated more than $6,000 to the students in prizes. We had great great support from the community that way.”rThe prizes included three welders, 20 welding helmets and several other welding-related prizes.

The prize winners were as follows:r