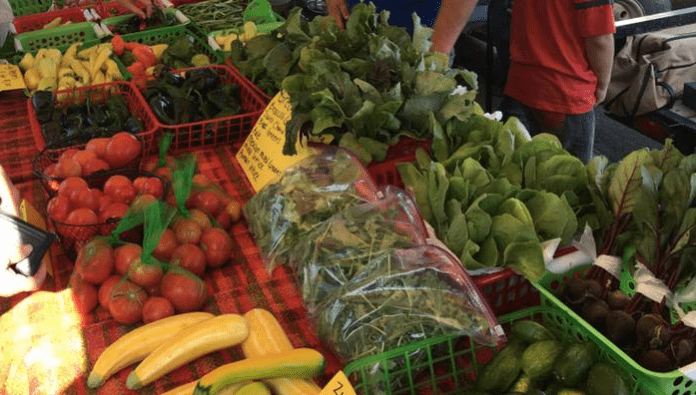 After a year’s hiatus, the Mapleton Market will re-open Monday evenings between July 31 and Sept. 25. Spanish Fork’s Farmers Market will be open Saturday mornings to early afternoons between July 29 and Oct. 28. On the other hand, neither Springville, Payson, Salem, Santaquin, Woodland Hills nor Elk Ridge have plans for farmers’ markets this summer, those towns’ officials said.

MAPLETONr“Last year they didn’t do one and it made a lot of us sad,” said Mapleton Market’s coordinator, Jill Uriona. “We’re just trying to build community. …

“I want my kids to learn to grow things and have retail experience selling them,” continued the mother of four. “We encourage teens to grow things or craft things, to sell them and make money.”

The Mapleton Market is great for socializing, too, Uriona said: “It’s fun to get to know our community better, and to know where our food comes from.”

Since Mapleton didn’t have a farmer’s market last year, and since the Mapleton Market team was slow getting started, there might be only a dozen or so vendors, the coordinator said. However, she added, since there is no cost to be a vendor for products produced within 25 miles of Mapleton, the number of vendors could increase.

Each week there will be a table with empty boxes, with each box representing a local family in need.

“We hope this will not only provide a healthy boost for families in need, but also a meaningful way for all of us to share the bounties of our backyards,” Uriona said.

Mapleton Market — open 6:30 to 8:30 p.m. Mondays July 31 to Sept. 25 — is to be in a new location this year: near the Main and Maple streets intersection, in the parking lot of the Old Town Hall, by the tennis courts.

“We’ll have 30 or more vendors,” Heather Youd, the chamber’s executive director, told Serve Daily. “We have quite a few who come with a temporary pass; they don’t pay for the full season.

“Ours is a true farmer’s market. Lots of fresh fruits and vegetables, lots of breads, lots of grains. We even have frozen lamb this year, and the Spanish Fork FFA is doing sausage.”

The Spanish Fork farmers market will not include crafts or other non-food items.

“One of the biggest changes is that we’re going to start accepting SNAP benefits this year,” Youd said, referring to a government support program. “We’ve been working with Tabitha’s Way, the local food pantry, and discovered there’s quite a need for produce for low-income families, and we thought this would be a good benefit for them.”

The Spanish Fork Farmer’s Market — open 8 a.m. to 1 p.m. Saturdays, July 29 to Oct. 28 — is to be located in the parking lot behind city offices, the stately building on Main Street across from the library.

“Though the idea of a place where farmers can sell their wares is hardly revolutionary, the local farmers’ market has seen a boom that’s raised it from hipster/yuppie food trend to integral part of the urban and suburban cityscape,” according to a 2014 article in the Smithsonian magazine’s online portal, Smithsonian.com.

“A July 2014 study in Food Policy found that giving low-income moms up to $10 in vouchers for fresh fruits and vegetables at local farmers’ markets increased their family’s consumption of healthy foods,” according to the Smithsonian article. “It’s not the first study to suggest that farmers’ markets could help improve diet and health of low-income families.”

The MapletonMarket.org website gives three benefits of farmers’ markets:r• “Produce is by far and away fresher, tastier and more nutritious than from a store.r• “It’s a vital way to support local agriculture and expand our food production capabilities.r• “It strengthens community. … You too may be surprised how enjoyable it is to just ‘hang out’ socializing, then later digging into some of the most delectably fresh foods imaginable.”