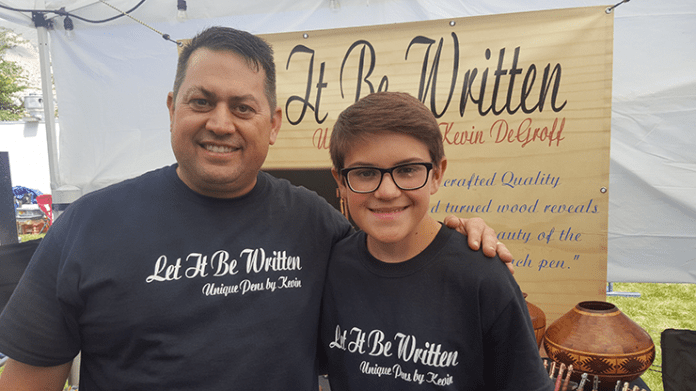 r Let It Be Written recently attended Art City Days in beautiful Springville, Utah. During the show, we met so many wonderful people and many former customers. Let It Be Written was started by KC DeGroff in an effort to fund his full-time mission for the Church of Jesus Christ of Latter-day Saints. Many individuals rallied around KC and bought pens from him to support his cause.

Because of all the support he received, KC was able to leave in June 2016 for The Charleston West Virginia Mission and has served in Kentucky, Virginia and West Virginia. While serving KC has bailed hay, tore down a house in preparation for Habitat for Humanity to rebuild and helped construct Adirondack chairs all while teaching the gospel of Jesus Christ to everyone he meets. KC loves serving and making others happy. It is hard to believe he only has one more year left.

Prior to leaving KC taught his younger brother Kevin how to make pens and run the business. He worked side by side with his brother and taught him all that he knew. Kevin also shadowed KC at many of his shows in an effort to learn how to communicate with people and conduct business behind the scenes. Although Kevin is only 15 years old he has learned how to run the business very quickly and has enjoyed seeing many customers who purchased pens from KC continue to support Let It Be Written and purchase pens from him. Kevin also has a deep desire to serve a mission and is working hard to achieve his goal of earning enough money to support himself on a mission. KC often stated, “a mission will mean so much more to me by earning the money by myself than if someone just paid for it.” Kevin has followed this same mantra and is on the pathway to achieve the same goal that KC has.

Kevin has enjoyed attending shows throughout Arizona and Utah. On July 7 and 8 Kevin will be attending the Payson Scottish Festival. Let It Be Written is also very excited to attend Midway’s Swiss Days on Sept. 1 and 2. Please come out and check out all the cool items Kevin has been busy creating such as his one of a kind pens, kaleidoscopes, peppermills, key chains and oil vials. Your support will be greatly appreciated.

Home and Fun Expo postponed until late May due to coronavirus