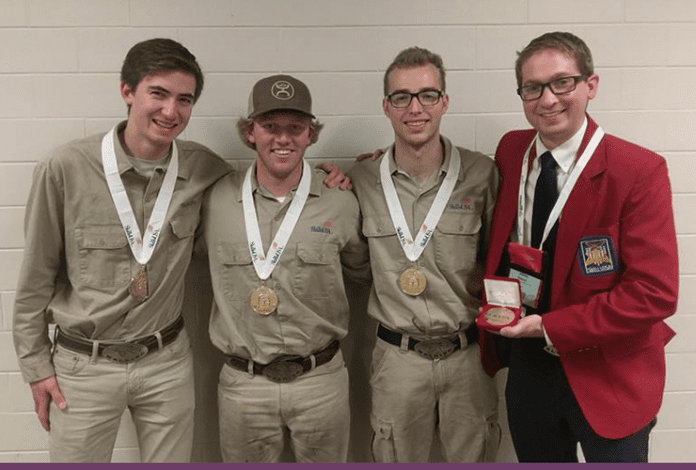 “We have a reputation for doing well but this is the first time we’ve actually won a national gold medal,” Jared Massic told Serve Daily. Massic started Maple Mountain High School’s welding program in 2009 and continues as its welding instructor.

Even though they were a day late to the competition because of severe thunderstorms and related delays, the three teens — Tosh Davis, Ben Warnick and Tyler Christmas — were allowed to each take a 100-question written test. When the three scores were averaged, the Maple Mountain seniors had earned the highest score of any of the other 37 teams of state winners.

“They won first place and I know for sure they got the highest score on the [written] test and on the fabrication quality [test],” Massic said, explaining that test as one that compares the finished product to its blueprint.

The Maple Mountain teens won the gold medal by effectively and efficiently using 6.5 hours to build a project they had designed, from materials they were given and requirements they were assigned to meet.

“The project was a welding and cutting table,” Massic said. “Every high school had the same requirements but every team designed and built their own project.”

The Maple Mountain teams had worked together beforehand with Massic to determine who was to do what to accomplish their task within the allocated time frame.

“We parents are so grateful for Jared Massic,” said Shauna Warnick. “He is a stellar man of character and great talent in teaching youth. Our sons have become better men because of his gifted mentoring.”

Massic, who started as a high school welding student in Ohio, worked as a welder for five years before starting the Maple Mountain welding program.

“I knew fairly early on I wanted to teach high school shop,” Massic said. “I had a passion for working with my hands and wanted to give that same passion to others.”

As to his teaching method, “I think they need to make sure the weld is done right, or that things are done correctly, not just ‘good enough,’” the welding instructor continued. “I just keep making sure they know there’s always room for improvement.

“Another goal is that I want them to leave my program to be able to get a job in order to work through college or to have a career,” Massic said. “They can leave my program and be in the welding industry as a viable career.”

The Maple Mountain welding team, part of about 90 students and advisers from Utah, can add “harrowing trip” to their participation in a national competition. They left at 9 p.m. Monday, June 19, for Baltimore. Because of severe thunderstorms in the area, their plane circled for a time before diverting to the Raleigh/Durham International Airport. Further delays included no flight crew and no driver available for a bus they thought they had chartered.

They finally arrived at their Louisville hotel about 1:30 a.m. Wednesday. After a short sleep, they needed to wake at 5:30 a.m. to take the written test at 8 a.m. That’s the one in which the Maple Mountain team took first place.

“The travel was a bit of a perplexing situation,” Massic understated. “We made lemonade out of bitter lemons by taking a train in [from Baltimore] to Washington, D.C., where we saw the capitol and Smithsonian Museum, some unique things we wouldn’t have seen otherwise.”

SkillsUSA Inc. is a partnership of students, teachers and industry working together to ensure America has a skilled workforce. The organization’s stated purpose is “to empower its members to become world-class workers, leaders and responsible American citizens.” This was its 53rd national competition.

Ladies in Action aims to empower and uplift and inspire women