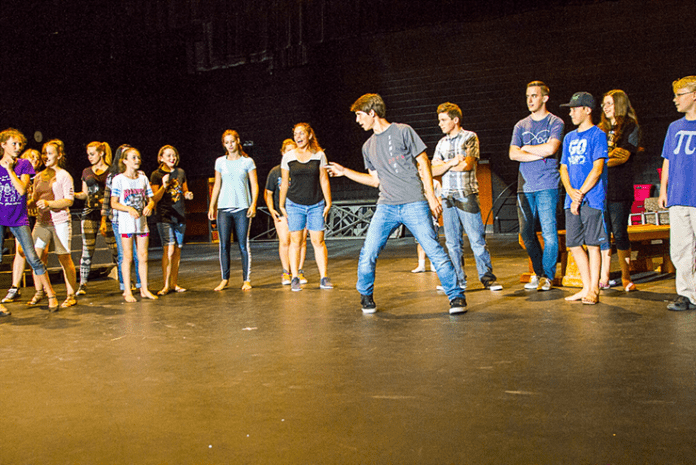 r The Salem area has no live theater group for young people in the community and Amy McKay has set about to do something about it. She has created the Young Performers of Salem group for ages 12 through 25 to have the opportunity to perform on stage.

To catch the attention of the young performer Amy wanted a lively stage musical and selected “Bye Bye Birdie.” This is a parody on Elvis Presley leaving his musical career after being drafted into the Army. Some readers might remember that bit of history from 1957. The Young Performers got permission to use the Salem Hills High School Theater, which is a really excellent facility. Auditions for the performance were held in the middle of May.

There are over 20 cast members with Sandy Millett as the Director, her daughter Maddy Millett as the Stage Manager, and Sierra Wisdom as the Choreographer. Amy said that they could use additional male performers, so if any of you guys out there are interested please give it a try you can call her at 801-360-0040. Rehearsals are underway right now and young talent is being perfected for the big show.

Performances will be held July 26, 27, 28, and 31 at the Salem Hills High School with the doors opening at 6:30 p.m. and the show begins at 7 p.m. One Matinee will be held on Saturday, July 29 with the doors opening at 1:30 p.m. and the show beginning at 2 p.m. Tickets are $6 for students, $8 for adults, and they will have a senior discount for those old enough to remember Elvis Presley. Tickets will be available online or at the door. The auditorium seats 1,463 people and it would be great if it could be filled for every performance of Bye Bye Birdie. Put the show dates on your calendar right now to be entertained and support the Young Performers of our area.

Producer Amy McKay and all of the staff and performers would like to thank the City of Salem and a private donor for making this Young Performers of Salem theatrical production possible.

Mapleton Pioneer Day to light up the night