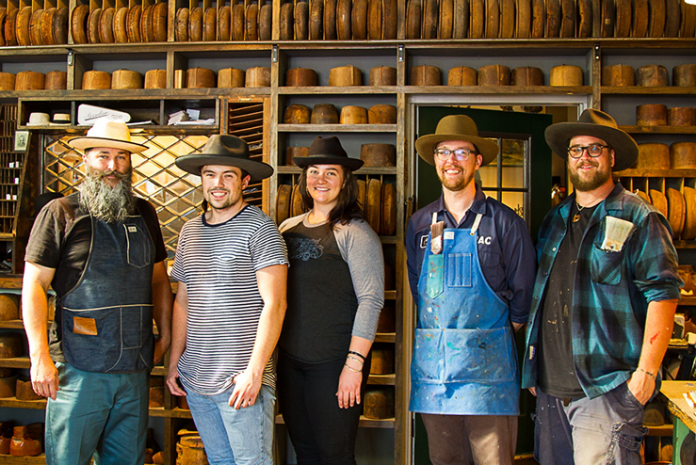 Irving Berlin wrote, and Fred Astaire sang, a song about puttin’ on your top hat and celebrating in the city. In Springville, Utah, there is a place where you can order a custom made top hat for yourself. It is located at 52 West 200 South in a brick building that was built in 1891.

Chandler Baird Scott thought it would be an ideal building for his craft of making custom hats. He began a restoration project that took 1½ years to complete and includes stained glass windows from an LDS church building. We now have a vintage building serving as home to the historic craft of hat making. The hats are made from one piece of felted fur which is blocked and plated into shape and has no seams. The only seams are in the binding and the sweatbands, which are sewn into the hat on a Singer 107 sewing machine. The felted fur is ordered from Tennessee and comes to the shop in a rough cone. About 60 percent of the blocks used for forming the shape of the hats are from the first hat shop in Utah started by John Charles Tatton in Salt Lake City.

Tatton apprenticed in England and immigrated to America. He came west with the pioneers, and Brigham Young financed his first shop. There is a portrait of Tatton hanging on the wall of the hat shop.

Making the hat is very labor-intensive and is a modern example of an ancient and vulnerable craft. There are 26 individualized steps in the making of the hat. Felting is the process in which the fiber is turned into a uniform material, and the pouncing process reduces the pile of the fur.

Tatton Baird sells hats worldwide and he even has a small shop in Tokyo. This is a unique craft business and there are only five or six hatters making hats in the United States and one of them is right here in Springville. For an interesting experience stop by and visit with the folks at the Tatton Baird Hat Co.