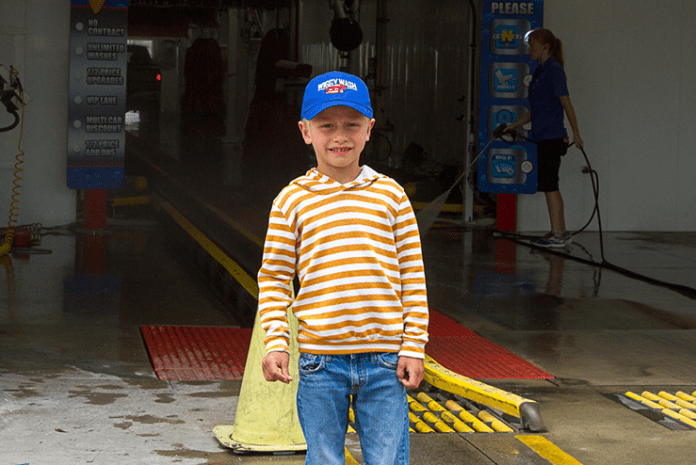 William Weight appears to be a typical 5-year-old boy. He will be turning 6 in August and will be going to kindergarten this fall.

William has Asperger’s syndrome, which is a developmental disorder characterized by significant difficulties in social interaction and nonverbal communication, along with restrictive and repetitive patterns of behavior and interests. It is a milder autism spectrum disorder and differs from other autistic disorders by relatively normal language and intelligence.

William visited the Wiggy Wash car wash in Springville about a year and a half ago, and he loved to watch the cars and trucks go through the wash tunnel. His family continued to take him to Wiggy Wash several times a week and he fell in love with the business. The folks at the car wash thought he was neat little guy and with supervision let him direct traffic into the wash tunnel.

When we met him on June 13, the first thing he told us was he works in the wash tunnel and he needed to be out there. Ed followed him into the tunnel with his camera and took pictures of him directing the cars into the proper position.

Janae Warner, Wiggy Wash manager, and Brent Wignall, an owner of the Springville Wiggy Wash, gave the employees permission to teach him to direct traffic and to step on the floor control to start the car through the car wash. They all have adopted him. They gave him a Wiggy Wash hat, which he wears with great pride.

In August, William’s birthday party will be held at the Wiggy Wash in Springville. This is a neat, small-town thing that we have going on at the Wiggy Wash, and we congratulaterthe operators for what they are doing for this young man.