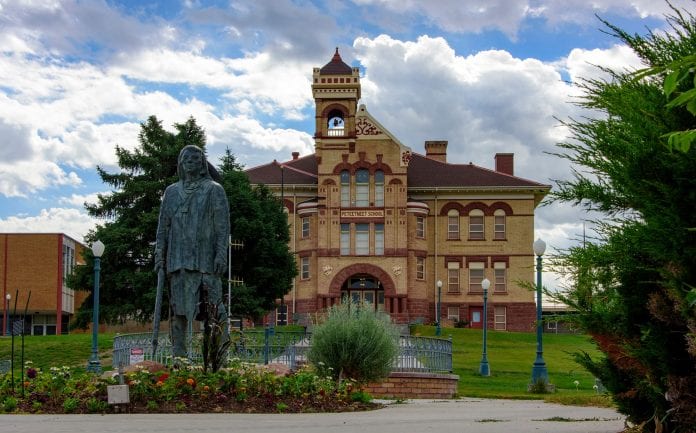 r PAYSON — A three-story stone and brick building constructed in 1901 today houses the Peteetneet Museum and Cultural Arts Center. It is less a museum of Payson than it is collections of Payson residents’ memorabilia.

In what for 85 years were sizable square classrooms with gleaming hardwood floors — carpeted in 1959 and now restored to their glistening maple origins — are housed more than a million items of interest or sentimental value to Payson residents.

“We’re acting like a storage house for Payson,” said Dee Stevenson, president of the Payson Historical Society and a retired educator. “When you think of this building, you think of Payson.”

The Victorian/Romanesque Revival building housed generations of students from 1902 until 1988, when the Nebo School District closed the aging building; it was deemed too expensive to bring the building up to then-current building codes.

After the building sat vacant for two years, prey to vandals, a group of Payson residents formed the PPP — People Preserving Peteetneet — to save the building, and put in long hours for another two years to restore the building now owned by the city.

“Today, the Historic Peteetneet Museum and Cultural Arts Center represents an ongoing act of love expressed by the community to all visitors,” according to the PeteetneetMuseum.org website. “Not only is it the restoration and preservation of a beautiful historic school building, but it is a gathering place for children and adults who want to enjoy the facility and what it has to offer.”

Peteetneet was the name of a Ute tribal leader who was kind to early-day settlers in what today is southern Utah County.

A variety of classes for children and adults — various kinds of dance, gun safety and the like — bring some people to the Peteetneet. So do weddings, reunions and numerous other family and community gatherings. Museum visitors make up the bulk of the nearly 50,000 who signed the register in 2016.

The heart of the building can be seen in the renovation of the building itself. A 15-minute video on the website gives some idea of the amount of work it took to restore the building to its original look. Without viewing the video, it’s not possible to appreciate the countless hours and backbreaking work the restoration took, as recently as 2015.

Three-hour guided tours take place at Peteetneet Museum and Cultural Center twice each weekday, from 10 a.m. to 1 p.m., and from 1 to 4 p.m. Guides carefully unlock (and relock) each door in turn, so visitors can step inside and see the contents.

The four rooms on the main level contain the contents of a Victorian-era well-to-do Utah family home; a mid-century school room; a room that changes every couple of months with art exhibits by local artists, many of which are for sale; and a room of display cases bought by and filled with memorabilia from various Payson families.

A Western room in the lower level that’s accessible via an elevator features statuary by Frederick Remington donated by a Payson family; items discovered by the relative of a Payson family who had found items at the campsite of the infamous winter-stricken Donner Family; and items from the four Payson residents who earned “World Champion” rodeo belt buckles. In a side room is a blacksmith’s shop donated by yet another Payson resident.

In the Fashions room — with items from 1850 to the 1990s — are garments worn in movies by stars such as Doris Day, donated by a Payson family with a relative who had worked behind the scenes in Hollywood. A timeless velveteen gown was handmade from drapes, perhaps to “keep up appearances” during an economic downturn in the life of Payson residents.

The Communications room on the top floor spans the gamut from feather pens and inkstands to rotary-dial telephones and vintage cameras. The War room includes a rifle used in World War I, and something from every conflict from the Civil War to the Middle Eastern conflicts, as well as a photograph of Gen. Jefferson Burton of Payson, who today heads the Utah National Guard.

Stevenson credits Gloria Barnett, who died in 2015, with organizing the museum’s contents and leading in the arranging of items reflecting the America in which Payson residents and their forerunners were reared.

“We keep an inventory of every item,” Stevenson said. “We’re a nonprofit. We kind of rely on people to donate.”

Admission to the Peteetneet Museum and Cultural Center is free, though donations are welcomed. Special private gatherings, events and classes do require a fee.