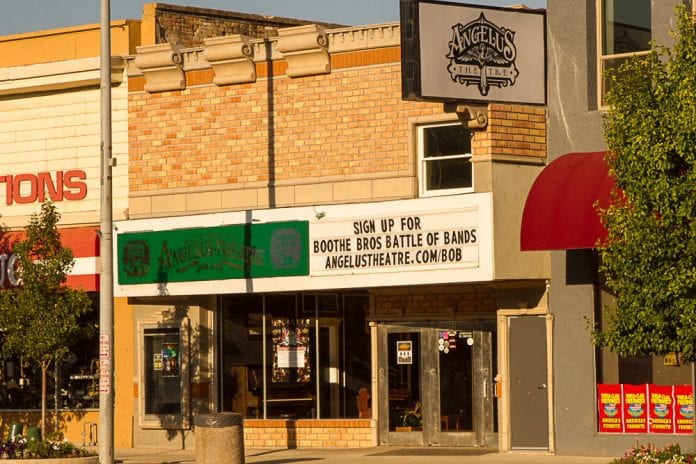 r In 1912 a young man by the name of Joseph Hanson built a theatre in Spanish Fork, Utah. Curt Gordon bought the theatre in February 2016 and hopes to restore it to its original grandeur and recreate the community treasure it once wa Gordon estimates he will need $25,000 to make the improvements, and he has created a Donation Page, to help with the fundraising. The grand reopening is scheduled for September 9, 2017.

This is the story of that theatre, but it is also a history of Joseph Hanson and other people involved with this theatre.

Joseph Hanson was born on January 30, 1874, in Spanish Fork, Utah. He married Elizabeth Williams on February 18, 1901, in Salt Lake City, Utah. They were the parents of four children by 1912: Anna Fay Hanson born September 20, 1901, Melba Elizabeth Hanson born October 28, 1903, Sarah Belle Hanson born April 27, 1905, and Roland Joseph Hanson born December 1, 1906. Perhaps the desire for someplace his children could go to see movies that was close to home was one of the motivations for the building of this theatre.

To advertise the opening of this theatre, there was a story written up in the local paper under the title “Angelus Theatre, Spanish Fork, Utah.”  The article reads as follows:

The Angelus motion picture theater, Spanish Fork, Utah, a photograph of which we publish herewith, was opened on Monday evening, September 9th, 1912, and has since played to crowded houses. It was completed at a cost of $14,000, and is one of the most pretentious buildings in the city, which has a population of only 4,500. It is modern in every respect, being steam heated and electric lighted. The foyer is eight and a half feet wide and is the full length of the building. The furnishings and decorations are artistic. The main auditorium has an inclined floor with 400 opera chairs. A number of boxes are at the disposal of theatre parties. The balcony is fitted with wicker rocking chairs.

The operating room is ten feet by twelve feet, metal lined, complete with two Power’s No. 6 projection machines with motor attachments and motor rewind. To the left of the operating room is a repair shop and a workroom. Four ventilators are placed in the ceiling with a sixteen-inch fan in each. The stage is twenty feet wide by six feet deep and can be used for light vaudeville, although Mr. A. L. Stallings, who is the manager and proprietor, prefers to run pictures.

Maxine Gordon and her friends would walk five miles from Lake Shore to the Angelus Theatre in downtown Spanish Fork. She remembers that on a Saturday night kids would be strung along the road walking to the Angelus to see a movie. The theatre was the center of all the entertainment in those days.

The theatre was Spanish Fork’s only movie theatre when it was destroyed by fire in 1948. The theater’s operators, the Huish-Gilhool circuit, rebuilt the Angelus Theatre on the same site, and it was reopened in 1950.

While the theatre was being rebuilt, Huish-Gilhool circuit opened the Arch Theatre in a Quonset Hut style building. An article in Boxoffice Magazine said the formal opening of the Arch Theatre had been scheduled for July 8. The Quonset Hut shape was retained, the front of the building was expanded to one side, and the whole edifice was given a modern design, built of redwood and of native rock quarried in Park City.

When the Angelus Theatre reopened in 1950, Spanish Fork had two theatres. The Arch Theatre discontinued operation on February 3, 1973, was turned into a sewing facility and has since been torn down.

The Angelus Theatre was renamed the Main Street Movies about 1984 and continued as a movie theater until 1999. It later operated under the name of Royal Palace Theatre playing live music performances. Most recently it has operated under the name of Boothe Brothers Performing Art Center as a live music venue. It hosts free community events and music education programs.

Maxine Gordon’s grandson, Curt Gordon, remembers visiting the theater as a child. But his involvement with the theatre didn’t end there. The theatre was purchased by the owners of Boothe Brothers Music in 1996. The owners of Boothe Brothers Music are longtime family friends of Gordon. Curt joined the retail music store staff and started using the theater which had been converted into a live music venue for events. He was playing with his own band, but as time passed, he realized that running shows for other bands was more rewarding than playing with his own band.

While Boothe Brothers made some improvements at the theatre, there is still a lot of work to be done. Gordon decided to buy and renovate the theater to restore it to its original grandeur. For more information about the History page on the Angelus Theatre site.