Making cents out of senselessness 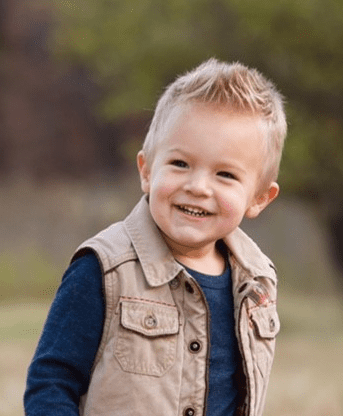 r SPANISH FORK – Levi Sampson died a week before his third birthday, but he will live through the ex 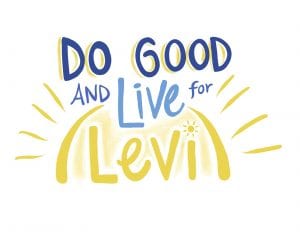 ample of his family and the donations that keep pouring in on his behalf.

Levi dashed out of his house and chased after his mom on July 19. She had told him to stay inside – it was pouring down rain – while she went to get the baby, being cared for by a friend, but as sometimes happens with preschoolers, he didn’t listen.

The young roadster jumped on his low-rider bike and energetically raced down the street to catch up, just as a neighbor backed out of her driveway. Both boy and driver went to the hospital. She was distraught, according to a televised news report. Levi didn’t recover.

“Levi lived a lifetime in his short 3 years,” according to his obituary. “There wasn’t a stone left unturned, a ball not thrown or a stick unused. He came into this life running and continued running all the way to heaven.

“His bright twinkly blue eyes and broad smile endeared him to all who knew him, even when he poked them with one of his famous sticks. Levi was fearless and thought the world was his playground. His zest for life and love for everyone he knew will be remembered fondly by those he left behind,” the obituary continued.

“When you first look at it, it looks like a tragedy,” Levi’s dad, Colt Sampson, told Serve Daily. “But it’s almost a miracle the way everything worked out the way it did. … It’s true that out of our biggest trial has come our greatest blessing.

The money, donated by friends and well-wishers, is a memoriam celebrating the life of Levi, said to be “larger than life” by his mom, CC. The money is to go to Primary Children’s Hospital in Salt Lake City, to be made available to families who need help.

“We’ll give it to the hospital and they will make sure it goes where they need it most,” Colt Sampson said. His family wants the money to go to Primary Children’s Hospital because of the care they saw their first-born daughter re

ceive 10 years ago when she was born with a rare intestinal malformation doctors at first said Skye probably wouldn’t recover from.

The Sampson family have lived in their Spanish Fork home for about five years. He owns the State Farm Insurance business in Spanish and in nearby Salem.

The couple met in junior high, dated in high school, and corresponded while he served the LDS church in Madagascar and she played college softball.

“When I came home, we started dating seriously,” Sampson recalled. “We got engaged that summer and married four weeks later. We had to get married before Football Camp started.”

Sampson was a freshman at the University of Utah that year. He was going to be a junior when Football Camp started the day, three years later, Skye was born. “My wife let me go [to camp] two hours after Skye was born. My work was done; my family was safe.” 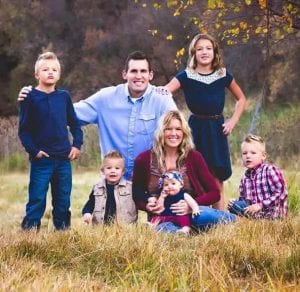 Until doctors found Skye’s malformation. For the next two weeks, the couple “lived” at the hospital, with the new dad – a tight end – scurrying off to UVU Football Camp every day.

Since then, until July 19, life had gone smoothly for the family, which grew to also include CJ, 7; Chance, 5; Levi would have been 3 on July 28; and Faith, 1 this March.

Spanish Fork police said Levi’s death was “a tragic accident.” No charges are expected to be filed. A witness driving by even saw the driver look out her windows before backing out, despite the vision-obscuring rain.

“Without the knowledge we have of the gospel, it would be very difficult to move on and have a successful life,” Sampson said. “Your first instinct is that you don’t want to move forward. But when you think of God’s plan, the knowledge of God’s plan gets us through the day.

“We teach our kids to live life to the fullest,” Sampson continued. “We decided to live for Levi. He lived life fearlessly, without fear. We want our kids to use his example as they live.”

Sampson said he wanted to add one additional thought in the Serve Daily newspaper.

“Encourage people to care for their neighbors,” he said. “A lot of times we can’t see the tragic accidents in people’s lives. … You never know who’s in need or who needs help.”