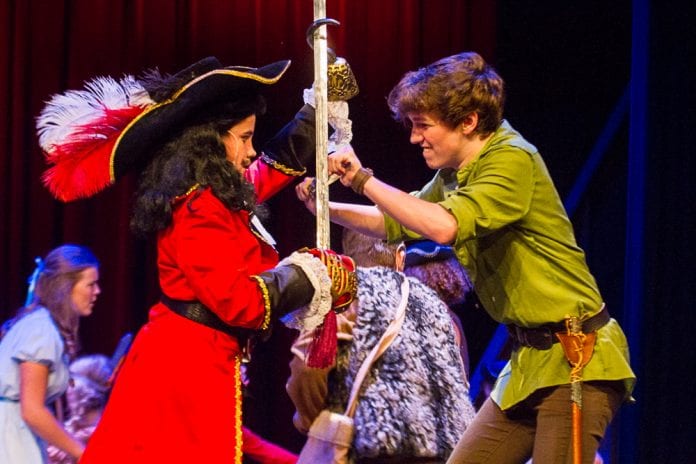 On July 27, audiences had the opportunity to watch the performance of Peter Pan put on by the Springville Playhouse at Springville High School. My husband, Ed and I have been involved with this play from the beginning because our good friend Mark Shipley designed, painted and constructed the backdrop. Mark is the father of Tannie Hjorth who directed the play.

Peter Pan lived in Neverland, and Neverland lives in the mind of every child, and in the imagination of the child that lives in every adult.

It is a play about children, performed by children. There were 150 young people who tried out for the play, and only about 70 of them could be used. Peter Pan and Tinker Belle were very engaging, and Captain Hook was fierce even if he was short. The costuming was well designed and added to the eye appeal.

Quoting from the program, “This is the inaugural year for the Springville Playhouse’s Youth Theater Council. They have been an integral part of putting on this year’s production. They are given internship responsibilities for all aspects of the play.”

On a clear summer’s night if a star winks at you, let your inner child take a trip to Neverland for a real adventure. Your safe return is almost guaranteed.