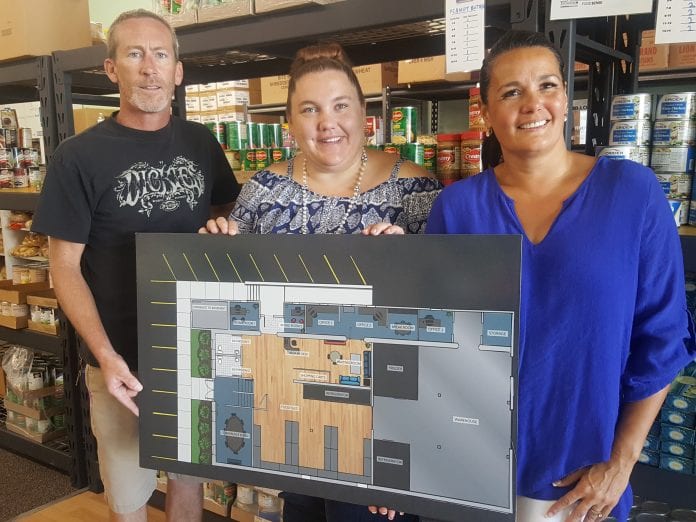 r Editor’s Note: Tabitha’s Way is one of the RAKM entities in Serve Daily’s South Utah County’s readership area. RAKM – Random Acts of Kindness Moments – illustrate the fact that it doesn’t take a lot of time to make a difference in someone’s life.

SPANISH FORK – Seven percent of the people who get food from Tabitha’s Way are homeless. The other 93 percent are working folks beset by some unforeseen circumstance such as back surgery, a broken transmission or another calamity.

Utah County has about 537,000 residents, and 78,000 of them live at or below federal poverty levels, says Tabitha’s Way founder Wendy Osborne. That includes one out of five Utah County children. In addition, the average apartment rent in Spanish Fork has increased nearly 25 percent in the last six months, according to real estate statistics.

Illness, accidents and the state’s $7.25/hour minimum wage – with salaries that often don’t include health insurance or other benefits – are among reasons so many Utah County residents are “food insecure,” Osborne said, a term she says denotes the anxiety people feel when they don’t know where their next meal is coming from.

“We have ample food; we have the resources, but we have a distribution problem. We need to get the food to the people that need it.” Osborne says in a video posted to the home page of TabithasWay.com. Nearly 60% of the people we are serving have a disability or have a major illness that they are dealing with, and that is why our new building in Spanish Fork will be ADA compliant to help meet the needs of persons who are facing these significant challenges. “It’s neighbors helping neighbors.”

Tabitha’s Way is one of the RAKM entities in Serve Daily’s South Utah County’s readership area. RAKM – Random Acts of Kindness Moments – illustrate the fact that it doesn’t take a lot of time to make a difference in someone’s life.

Some area residents buy something for Tabitha’s Way when they do their own grocery shopping; they host neighborhood (and school) food drives and food scavenger hunts; they volunteer their time and/or they donate so people can find what they need when they go “shopping” at Tabitha’s Way.

It’s called “client choice.” People stop in at 140 N. Main in Spanish Fork – a second store is now open in American Fork, northern Utah County – and give some demographic information along with showing a picture ID to a client intake representative.

“The process to get help is fairly simple,” Pantry Manager Melissa Prins told Serve Daily. “We don’t turn anyone in need away. We just gather demographic information to apply for grants; we keep your information private.”

Tabitha’s Way has 25 categories of food on its shelves, with placards showing how many of each category can be selected per family size. There are canned goods, frozen meat, deli items, dairy items and produce. Shoppers twice a month can get a cart and fill it with what they want from what’s available.

The most-needed items, according to Inventory Manager Mark Driggs, are cereal, canned meat, peanut butter, canned or dried pinto/black/and the like beans, and chili.

“We try really hard to make it an open and caring environment where everyone feels welcome,” Prins said. “Most of the people who come here have jobs, two or three jobs.”

Donations of money are needed most as every $10 we receive provides enough resources to feed a person for an entire month. Other donations such as diapers, hygiene and cleaning supplies from area residents are welcomed and needed throughout the year. Filling in the gaps are the donations by several area grocery stores.

The average American throws away 70 pounds of clothing a year, SMART Recyclers has determined. As much as 95 percent can be recycled yet only 15 percent is. “It’s only wasted if you don’t do something smart with it,” according to information about recycling footgear and clothing found on the TabithasWay.com website.

Since April 2016, Tabitha’s Way has been gathering shoes and clothing in more than 150 bins scattered across South Utah County, and has plans to add 150 additional bins. Rather than being cleaned, sorted, hung or folded, which Tabitha’s Way volunteers used to do, the footgear and clothing are sold wholesale. Proceeds from the resold textiles pay for 25% of the operating cost to run the pantries. That means Tabitha’s Way relies on generous donors to fund the remaining 75% to help keep things going.

About 95 percent of textiles can be recycled, according to the website. About 45 percent can be re-worn, so it’s sold. Another 30 percent can be turned into cleaning cloths and sold. About 20 percent is winnowed down to its fibers.

The second life for a stained t-shirt can be as a cleaning cloth; a lone sock, pillow stuffing; old denim, household insulation. So, don’t think of castoffs as going to the landfill since they’re “not even good enough” to be worn. No matter how thin or torn, they can somehow be recycled. Just take them to a Tabitha’s Way bin.

The Grocery Rescue Team goes to area grocery stores and picks up what they want to donate to Tabitha’s Way. Three-hour shifts are available between 8 and 11 a.m. Monday through Saturday.

Client Intake Representatives meet one-on-one with new clients to get demographic information and familiarize them with Tabitha’s Way. Three-hour shifts are available 11 a.m. to 2 p.m. Tuesday through Friday and 10 a.m. to noon on Saturday.

Shopping Assistants in two-hour shifts during store hours help clients make meals out of the available items at Tabitha’s Way.

Strong-armed people are needed to unload items as they come in, and to place them on the pantry shelves, too.

Food Drive Leaders organize neighborhood, school and community drives to collect substantial amounts of food at one time. A “Food Drive Kit” is available through Tabitha’s Way to help start the process.

Drives can also include babies’ and school kids’ needed items as well as hygiene and cleaning supplies for the home.

“We could use 30 volunteers a day, committed volunteers who can come in and volunteer on a regular basis,” Prins said. “That would be so excellent!”

About 30 percent of Tabitha’s Way clients speak Spanish, so bilingual volunteers would be helpful, Prins added.

Consider Tabitha’s Way as one way you can perform RAKM.