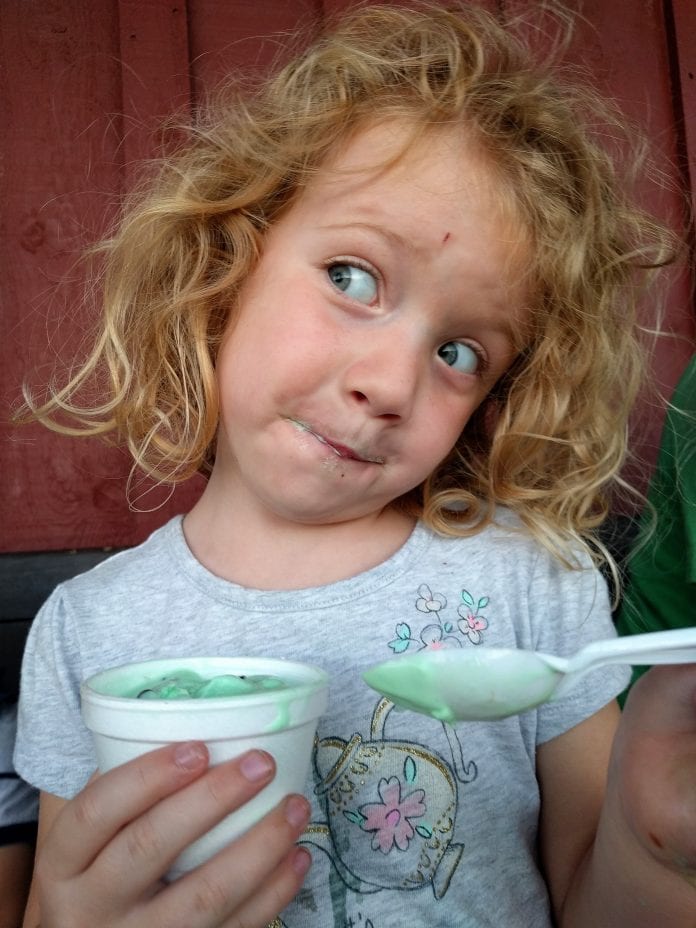 Rowley’s Red Barn is always a fun place to stop in. When I heard that I was doing a review at Rowley’s, I thought of ice cream and apple cider. I didn’t realize all the delicious treats they have or that they make pretty much everything on site. Most places outsource some items like baked goods or popcorn; not Rowley’s Red Barn. They have their own cider press where they make their signature apple cider. They make their own flavored popcorn. They make jams, salsa, and jellies. They make their own creamy delicious ice cream. They make all the cookies and sweet treats, the caramel apples, and the pies. The fudge, yep that’s made there too. If you want something fresh, local, and homemade Rowley’s is the place to go. After the tour, I was super impressed with the diversity of items that they make. I was excited to try a few of their specialties. I had seen a video on Facebook about their fresh made peach shakes. Growing up, I had always been a fan of Brigham City Peach Days and the famous peach shakes. I had high expectations. Let’s just say they were met. The peach shake had the most delicious, fresh flavor. It had chunks of peach in it. It was just super yummy and creamy. I loved it. This is a seasonal item though, so you have to act fast.

rI have always wanted to try their fresh pie. When touring the facility, I learned that they actually make the filling with just fruit and sugar. Plain, simple, and delicious. I got a slice of the cherry pie and it was one of the best pies I’ve ever tasted. The cherries were just the right blend of tart and sweet. The crust was flaky and light and complimented the filling. I got it a la mode with two huge scoops of that creamy homemade vanilla ice cream.

Speaking of the ice cream. Have you tried their ice cream? Growing up there was this place called Country Boy Dairy where I lived. They made the creamiest, richest ice cream ever. The ice cream shop was right by the dairy. So you could see the dairy behind and then the cows were in the field to the side. When Country Boy Dairy closed, I thought I would never find ice cream that good again. Well, say hello to Red Barn ice cream. They have a variety of flavors from Oreo Fudge (personal favorite) to Licorice (as in black licorice), to Key Lime Pie to just about anything delicious you can imagine. We are talking small batch, real-thing ice cream. Ok. Now for the star of the evening. Quite possibly the most refreshing, yummy thing I have ever eaten: the apple cider slush. So the apple cider is epic and just so crisp and fresh. I don’t know how they capture the crisp bite of a fresh apple but they do. So you get that and you make it all icy. THEN you can add in some soft serve, either caramel or vanilla. Yeah. Just imagine that combination of flavors and fresh and creamy all together. It is amazing. Normally my husband says desserts are “pretty good.” He told me this was one of his favorite desserts ever. It was that good.

So if you have been to Red Barn before, rediscover it. Go for a visit. If you haven’t been, you need to make the trip down to Santaquin. They have some fun events coming up too. Starting September 22nd, they will have a corn maze (in the shape of an ice cream cone, of course), hay rides, and a pumpkin patch. Plus, they start making homemade doughnuts, which I need to return to try.

Rowley’s Red Barn is family owned and is in the fourth generation now. They are passionate about providing the community with high quality, fresh items. Plus, they have a huge cooler room that has fresh local produce that is the epitome of fresh. The Red Barn is located at 901 South 300 West, Santaquin, Utah 84655. They are open from 9 am to 9 pm Monday to Saturday through Halloween. After Halloween,