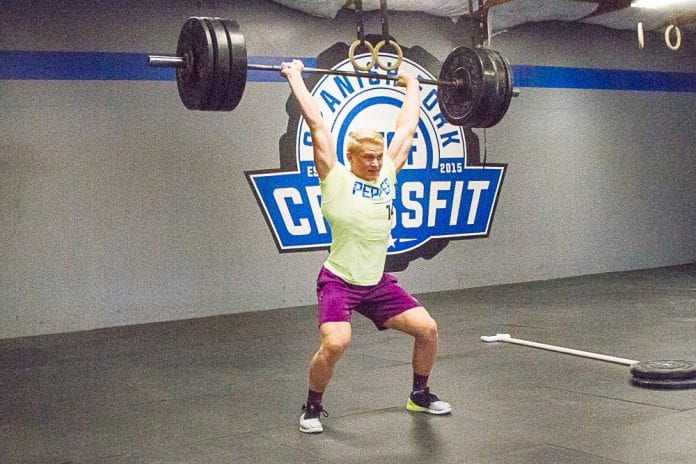 r Fittest Teen on Earth is the title Dallin Pepper earned at the Crossfit World Games in Madison, Wisconsin in early August. He not only won in his age class, but he scored 68 points more than his nearest competitor.

Crossfit is both a physical exercise philosophy and a competitive fitness sport. All Crossfit workouts are based on functional movements, and these movements reflect the best of gymnastics, weightlifting, running, rowing and more. The Crossfit program is driven by data. Using whiteboards as scoreboards, keeping accurate scores and records, running a clock, and precisely defining the rules and standards for performance are part of the training.

We met Dallin on Monday, August 21 at the Crossfit Studio in Spanish Fork. We also met his father and his mother. Dallin is fifteen, but will be sixteen in October. He is a Sophomore in high school, and refers to himself as “just Dallin.”

He is a very focused young man. He maintains a 4.0 GPA, and will be taking Upper Division Math III, which is junior honors math. However, math is not his favorite subject. His favorite is reading, but he dislikes English. As you can see Dallin strives to succeed in all things he does. When he faces a loss, he refocuses his thinking and makes the changes to step it up.

Dallin and his family have lived in several areas in Utah, but they settled here in Spanish Fork because of the opportunities for Dallin and his four siblings.

When he was introduced to Crossfit, he wasn’t a fan. He couldn’t even do a pull-up.  Ryan Bagley, owner of the Spanish Fork Crossfit said he was just another 120-pound scrawny kid. It took him about a year to realize he wanted to compete, and then he wanted to win.

During the summer, Dallin works out six days a week, three to four hours a day. To help with the expenses, Dallin assists around the gym. He works on weekends and cleans the gym and the floors and the bathrooms.

The biggest thing he has learned is that hard work pays off. He likes to see how far he can push himself and what his capabilities are every day. He likes to find his weaknesses, and then hammer them until he is good at them. That is fun for him.

Currently, he is in training for the 2018 Crossfit Games.