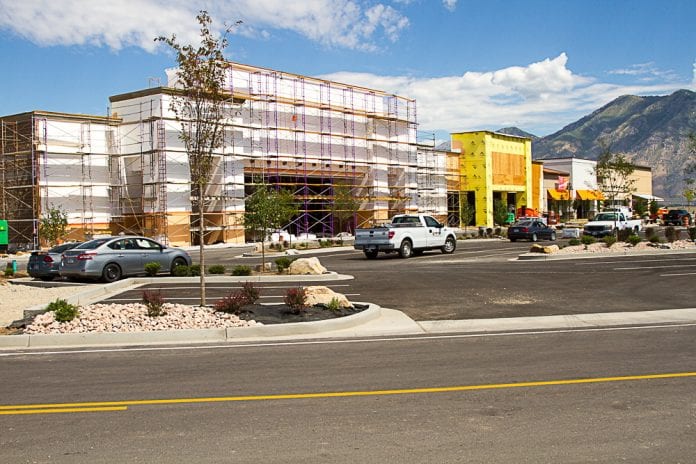 r Maybe you have noticed that business construction is booming near the intersection of Highway 6 and I-15. To learn more about what is going on we talked with Dave Anderson, Director of Community Development for the City of Spanish Fork. He told us the story really began about ten years ago when Target and Home Depot were planning on moving to Spanish Fork. The City invested in the infrastructure for North Point business development. Then, the economy tanked, and the plans to locate the two big box stores were canceled. The city was really invested in building North Park, so they went ahead and finished the beautiful park area which is enjoyed today by residents.

When the economy began to get better, Costco expressed an interest in the North Point area where Target was going to locate. Shortly after Costco announced it was coming to Spanish Fork, Walmart also announced their move to Canyon Creek Shopping Center. Costco opened its doors in October 2012, and Walmart opened in 2014. Both these businesses are very successful, and that has encouraged other businesses to move to Spanish Fork. Olive Garden, Ross, Petco, TJ Maxx, Maurices, Ulta Beauty Products, Downeast, and Famous Footwear are planning to be open by Thanksgiving to take advantage of the Christmas shopping season. Cinemark Theatre is also well under construction and plans to be open by Thanksgiving. We will also be welcoming a Panda Express in the near future.

The City of Spanish Fork’s decision to develop North Park ten years ago has turned out to be a wise decision. Not only do they contribute to our quality of life, they also bring a large tax base to support city services such as the police and fire department, as well as park and recreational opportunities.

When asked if people were moving to Spanish Fork from other areas of the country, Dave said that at this time most of the residential growth was coming from children and grandchildren of current residents starting families of their own and needed housing.  He told us that quality of life is a big component in the growth of Spanish Fork. The area also has plentiful jobs and based on business projections as noted above that trend will continue. Residents currently enjoy less than 4 percent unemployment.