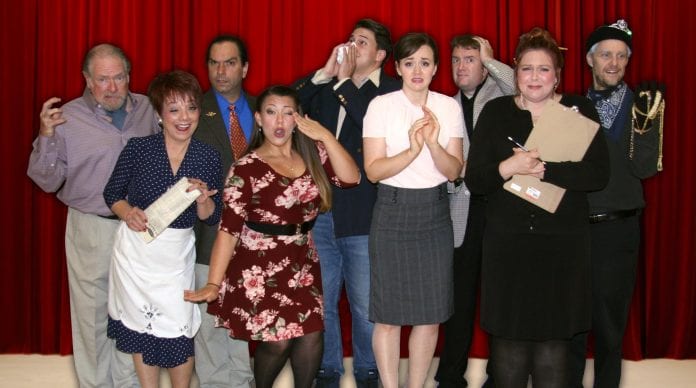 r Backstage blunders become the main event in the hilarious comedy Noises Off, the most recent offering by the Springville Playhouse. The production will open on Friday, September 15.

Performances will continue on Fridays, Saturdays and Mondays through October 7 on the stage at Merit Academy, 1440 W. Center, Springville. The show will begin at 7:30 p.m. each evening with the doors opening at 7 p.m. Seating is first come, first served. Tickets are available at the door at $10 for general admission and $8 for senior citizens and students.

Noises Off, written by Michael Frayn, tells the story of a theatrical group rehearsing a farce. Each act contains a performance of the first act of the play the group is rehearsing, and the audience first gets to see the production problems from the front of the stage, then the chaotic personal quarrels developing backstage. The comedy ramps up as the cast try to cover up the deteriorating situation backstage while still performing the show. Noises Off gets its name from the theatrical term indicating there is noise coming from backstage.

The show’s cast includes Lon Keith as Lloyd, Robinne Booth as Dotty and Eric Johnson as Selsdon. Rounding out the cast are Dave Chapa as Garry, Nate Warenski as Frederick, Starr Williamson as Brooke, Joni Newman as Belinda, Greg Duffin as Tim and Michelle McManus as Poppy. The show is being directed by Robinne Booth and Connie Warenski.