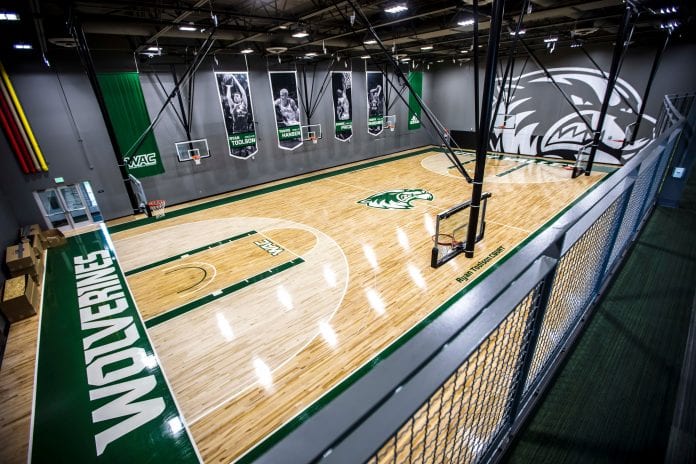 r By Jason EricksonrUtah Valley University cut down the nets on Wednesday, September 13, to officially open the NUVI Basketball Center, a new practice and conditioning facility to house its men’s and women’s basketball teams.

The 14,500-square-foot facility was funded entirely by private donations and sponsorships totaling approximately $4.4 million, including a lead donation from NUVI chairman and CEO Keith Nellesen.

“The NUVI Basketball Center is one of the best practice facilities in the WAC,” said UVU athletic director Vince Otoupal. “It will help our basketball programs continue to pursue success both on the court and in the classroom. The facility changes the way our student-athletes and coaches approach their craft and will make our programs better. We are excited about our continuing partnership with NUVI and the Nellesens with the Melisa Nellesen Autism Center, Cole Nellesen Autism Building, the NUVI Social Media Command Center, and now this amazing basketball facility. UVU is better because of our partnership with NUVI.”

A mezzanine level overlooks the court and includes the Roger Fields Family Basketball Offices — 3,000 square feet of office space split into suites for the men’s and women’s coaching staff. Each suite features a large office for each head coach that can double as a conference room and offices for three assistant coaches and basketball operations.

“This University provides opportunity and promotes student success,” said UVU men’s basketball coach Mark Pope. “It is a place where students raise their faculties and broaden their minds. This building does that very thing for our student-athletes.”

“The NUVI Basketball Center will have an immeasurable impact on our day-to-day function and growth as a program,” said UVU women’s basketball coach Cathy Nixon. “Just giving our girls somewhere to come any time to shoot and work on their game is a huge difference maker. We’re so grateful for the many people involved in funding, planning and building this facility to help us in our quest to win WAC championships.”

The UVU men’s and women’s basketball teams will begin practice in the NUVI Basketball Center for this upcoming season. The new facility will help prepare the men’s basketball team for its upcoming games at Kentucky and at Duke in back-to-back nights on November 10-11, which has been called “the toughest 24 hours in college basketball.”

“This beautiful facility will be a basketball factory that will facilitate our players in chasing their biggest possible dreams,” Pope said. “The NUVI Basketball Center fully equips our program to prepare our players to win WAC championships and earn NCAA tournament bids. This facility is also a symbol of tremendous support from the Utah Valley community. It’s a game changer.”

Nebo high school athletes are inspired to make a difference