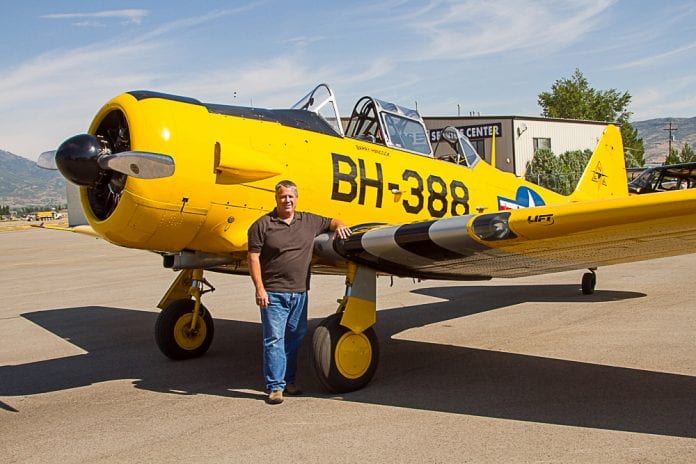 r Like a lot of men whose fathers flew Army Air Corp airplanes in World War II, Steve Gray had always wanted to fly in the airplane his father flew as a young cadet. This had been a lifelong dream. Steve felt it would be a tribute to his father and to his mother who was a young nurse at the time. After basic and advanced flight training his father flew B-24 bombers before returning to civilian life and raising a family.

Last month Steve got his “airplane ride of a lifetime” in a North American T-6 advanced trainer from the WWII era. This was facilitated by airshow pilot and flight school owner Barry Hancock at the Heber Airport.

It was a beautiful blue sky morning when Steve arrived at the airport with great excitement and a little anxiety about something he has never done before. He brought with him photos of his father in his flight gear as a proud cadet and another picture of his beautiful mother in her crisp looking 1940’s style nurses uniform. This was clearly the day Steve Gray had been thinking about for a long time.

Now to the airplane, the T-6 is huge compared with training aircraft today such as a Cessna 172 or Diamond DA20. The T-6 has a big round engine that produces 600 hp and a 42-foot wingspan. Since this airplane is approved for aerobatic flight the safety briefing included how to use the parachute you will be wearing.

After liftoff and climbing to a safe altitude, Barry asked Steve if he would like to take the controls. Steve was a little hesitant to move the control stick very much. Then Barry demonstrated a wing over, a couple of rolls and a loop. Steve got a new perspective at looking at the world from above.

When they landed and taxied to the ramp at Barry’s hangar, Steve had a smile as wide as the big round engine on the front of the airplane and a thumbs up gesture. It truly was Steve Gray’s airplane ride of a lifetime. A few days after Steve made his flight, his mother passed away, making him even more thankful he made the flight when he did.

During WWII the T-6 was known as “The Pilot Maker” and Barry Hancock named his flight school Pilot Maker Flight Academy. He operates a variety of airplanes for private pilot through commercial pilot training, aerobatic training, and tailwheel endorsements. His flight school in Heber is developing an excellent reputation, and he has now opened an office at the Provo Airport.

For information on T-6 rides and pilot training contact Pilot Maker Flight Academy at 435-315-3944. For those people that attended the Springville-Spanish Fork “Aeroplanes, Trains, and Cars” event September 15, Barry flew his yellow T-6 in that event.