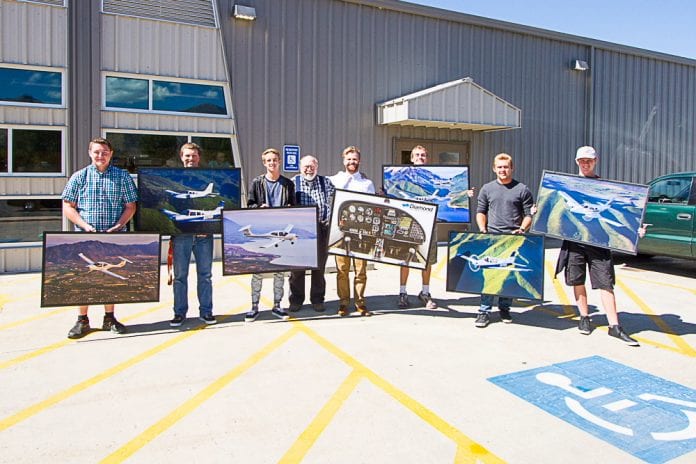 r The Advanced Learning Center (ALC) provides early college and career courses to Nebo School District students, offering a wide variety of advanced learning opportunities.  One of these courses is Aviation, taught by Mark Halls who is a former pilot at Diamond Flight Center at the Springville/Spanish Fork Airport.

Recently the ALC had an open house which my husband, Ed, and I attended. One of the classrooms we visited was Mark’s Aviation classroom. We had a chance to speak with Mark, and he told us he was looking for aviation photographs to put on the walls but was having a hard time finding them.

When we closed Diamond Flight Center in September of 2015, we carefully wrapped the photos of our aircraft in plastic in the hope that they would one day grace the walls of another aviation classroom.

As we were driving away from the ALC, Ed reminded me of the photos we had so carefully preserved and asked if we could donate them to Mark and his students. I immediately agreed this was a wonderful idea.

On Tuesday afternoon, September 19, we drove to our storeroom, uncovered seven photos and then we drove to the ALC. We checked in at the office to see if Mark was there, and when we told the receptionist that we had photos for his classroom, she said he was at the school, suggested we park near his classroom door and take the photos to him. She was as excited as we were. As we parked, Mark and several students walked out of the classroom followed by the receptionist who had a camera. We gave the photos to the students, and Ed had his picture taken with the students and photos. Those wonderful photos are now gracing the walls of another aviation classroom and an inspiration to fly.