Be your own hero at the Special Ed Extravaganza 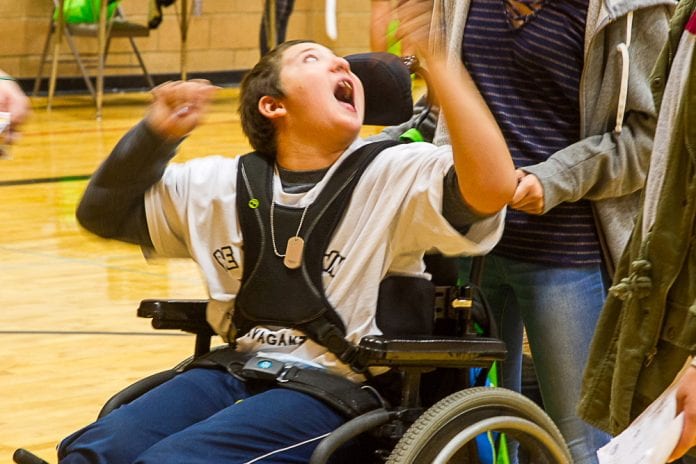 r Ammon Allred, who is confined to a wheelchair, bent over as far as possible and rolled the bowling ball into the pins ahead of him. When he realized he had knocked them down all at once, his face lit up and he expressed his joy with a yell. His coach joined in his happiness, high-fiving him and patting him on the back. Ammon attends Payson Junior High, in Payson, Utah.

The Special Education Extravaganza was held Wednesday, September 20, at Diamond Fork Junior High in Spanish Fork, Utah. What began as a dream to have a special needs class participate in an intramural program, the Extravaganza has become an anticipated district-wide event that involves every junior high school special needs student in the Nebo District.

Each year, for the past 11 years the Extravaganza has become more popular, larger and has more to offer. Eventually, this program developed into a peer tutor conference involving numerous students from a host school as well as from each junior high in the district. This year’s theme  “Be Your Own Hero” was printed on T-shirts given to every special needs student. Coach Linda Jones Lewis is one of the founders of the event. She worked as a teacher in the Nebo School District for 40 years. She has been retired for five years, but she still organizes this event every year. When we first met her, she was talking to the peer tutors from Miss Holly Averett’s first-period Character Education class. She told the tutors “remember, this is not about you, it is about them.”

There were 110 peer tutors who coached the 102 special needs students from the seven junior high schools.  There were 14 stations set up for the event, four of which were outside.  These four outside events were the softball throw, 100-meter run, running long jump and high jump. Awards for the best achievements in the outside activities were given at the end of the event. Inside the gym, the special needs students could have their nails painted, go fishing at the fish pond, have their faces painted, go bowling and much more.

I found the special needs students were friendly and excited about the event. The fish pond was a great place to be sitting. Some of these students did not understand how to throw the clothespin over the drape, and their coaches took time to show them, and help them as necessary. It was wonderful to see the joy when they pulled that fish line back on their side and found a frisbee or a necklace or a kazoo attached to it. Those kazoos were everyone’s favorite. What a joyful noise was heard all day.

At 11:30, the students at Diamond Fork were dismissed for lunch, and the special needs students ate the sack lunches they had brought with them. The teachers and other adults were treated to a lunch of pizza. One of the young men sitting by me asked for help with putting his straw into his drink, and needed help with his potato chip bag. When he took his drink from me, some of the juice spilled onto the bench, and he was so careful to take his napkin and wipe it up. Then he handed me the used napkin to put in the garbage for him. He has been trained well, and his parents can be proud of him.

One of the participants was a dark-skinned student with braids coiled around her head.  Everyone kept referring to her as “she.” Finally, she reminded us that she was not a girl but a boy. How refreshing to interact with a youth who is proud of his gender, and who he is.  He earned a ribbon, and after receiving it, he folded his arms, bowed his head, and closed his eyes. I suspect he was saying thanks.