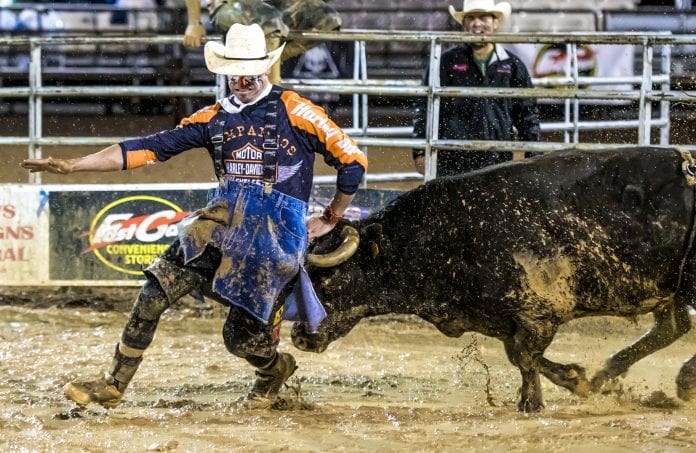 r Rodeo bullfighting is what rodeo clowns do to protect a bull rider who has gotten bucked off and may be attacked by the bull if not distracted. That job has evolved into its own rodeo event now known as freestyle bullfighting. It is a competitive event like all rodeo events with two judges each scoring the aggressiveness of the bull and the agility of the bullfighter, his ability to keep the attention of the bull, and his showmanship.

For this type of event specially bred Mexican bulls are used because they are smaller, quicker, and “smart.” The arena action is dangerous and potentially deadly, even with protective vests, hip pads and some wear knee guards. As a spectator sport, it can be an adrenalin rush that puts you at the edge of your stadium seat.

Freestyle bullfighting was brought to the Spanish Fork Fairgrounds Arena Saturday night, September 23, by Gary Jones as a fundraising project for Type 1 diabetes research. Gary’s son, Westlee, was diagnosed with Type 1 diabetes years ago. A raffle was also part of the evening.

It was a wet, cold evening and the arena floor was muddy. When the action started with 1,000-pound bulls in a contest with a 150-pound man the audience stopped shivering in the cold with tunnel vision focused on the players. The danger to the bullfighter was obvious and illustrated several times, but without serious injury.

Gary Jones had been a well-known rodeo clown and bullfighter for 14 years and in 1991 and 1992 was a National Finals Wrangler Bullfighter. He retired and moved to Payson to become a realtor with Re/Max in Spanish Fork. Then, the rodeo days called him again and he wanted to get back in the arena as a bullfighter.

At the age of 48, with the help of some sports medicine people and a rugged physical conditioning program Gary returned to the rodeo arena in the 2012 Fiesta Days Rodeo in Spanish fork. This was a remarkable event in the annals of rodeo history.

Gary’s son Westlee grew up watching his dad’s bullfighting videos and was 10 years old when his dad got back into bullfighting in 2012. Westlee’s dream was to be a bullfighter like his Dad. At age 16 with careful monitoring of his blood sugar by his mother, Cyndi, he was approved to compete as a bullfighter in the September 23 event. Becoming the first freestyle bullfighter with Type 1 diabetes at age16 is a remarkable achievement.

This one-night bullfighting event raised $20,000 for the Juvenile Diabetes Research Foundation (JDRF). In the four years that Gary Jones has been hosting this event a total of $52,000 has been raised.

JDRF sponsors $530 million in scientific research in 17 countries. The goal is to develop technology to make life easier for the Type 1 diabetic as well as the ultimate goal of finding a cure.