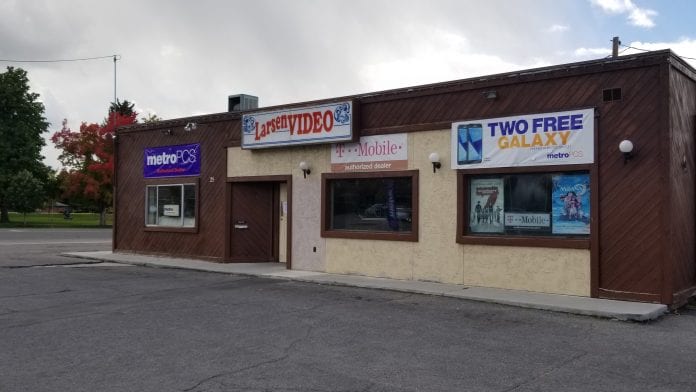 r SPRINGVILLE – Leon Larsen says he has no idea why people keep coming to Larsen Video, 30 years after it opened in October 1987.

Though not as busy as it was in the early years of the video industry, he still sees a steady stream of customers Tuesdays through Saturdays.

“I’ll tell you what they tell me,” Larsen told Serve Daily, referring to his customers. “They like to look at all the movies. They like to talk with someone about them. And they like a small store more than Redbox.”

Larsen has 8,500 titles and continues each month buying new ones. He gets them the day they are released to the public, which is about a month before Redbox gets them, he added.

Included in the store’s offerings are VHS tapes as well as DVD and Blu-Ray videos. Some date to the store’s opening.

“In 1987 it was videotapes,” Larsen said as he wandered through the store located at 25 N. Main, at the intersection of Hwy 89/State Street. “Most kids under 40 don’t own VCRs anymore.”

He rents movies now for the same price as he did back then, in part because he doesn’t have the overhead he did 30 years ago. The store is paid for. The cost of videos has come down. He doesn’t have the number of employees he used to.

“We used to have eight employees here, Fridays and Saturdays,” Larsen said. Now the store closes early those two nights, at 8 p.m.

He doesn’t buy used videos, but on occasion he sells extra copies and slow-movers. He buys new releases based on what he thinks his family-oriented clientele would like.

Larsen’s non-tech way of doing business hasn’t changed. He keeps the video jacket in the racks, fronted by a small square of white cardboard on which is a code that tells him when he bought the video and where it can be found on the shelves. Customers take the white card for the video they want to rent to the front counter, where Larsen keeps the actual videos.

This not only keeps the store orderly: no misfiled videos; it negates the shoplifting specter, which cuts down on overhead.

Larsen’s keeps the new releases in one, two-wall section. Non-new-release comedies are nearby on another two walls. Around the corner: action, adventure, family and even a section of VHS tapes. Even more important: walk in with the name of a movie you want to rent and Larsen will walk right to it.

The first video rental store started in 1977 in Los Angeles, shortly after 20th Century Fox licensed 50 of its movies for sale directly to consumers. By 1985, there were 15,000 video rental stores across the nation, according to an article published by Associated Press.

But by about 2005, rent-by-mail and, later, online streaming of movies sounded the rapid demise of most video stores. Massive chains like BlockBuster and Hollywood Video have withered. Larsen Video didn’t miss a beat.

“Getting into the video rental business was my wife’s idea,” Larsen said. He had worked at Geneva Steel for 25 years and was downsized when new owners came in. Leon and Carolyn had five children and needed income.

“We talked about what to do,” Larsen said. “We liked movies, felt like we had an interest in the business, so we opened a place on Main Street.”

But there was no parking at their first location, and a “movie house” was nearby, so they cast about for another option. A tanning salon was using half the building Larsen Video currently owns. They bought that property and have kept it in much the same condition as it was after three weeks of renovation.

All that’s different is a display for Metro PCS, a no-contract telephone service that starts at $30/month and includes buying a telephone. Several varieties are available. One that costs $39 is “a lot more for the same phone from T-Mobile,” Larsen said. Larsen Video also contracts for T-Mobile.

All five of their children worked over the years at Larsen’s Video, teaching them responsibility and a solid work ethic. Today, for the most part, Leon and Carolyn work without the addition of employees.

“I’m working more hours now than I have in years, but I still like it,” Larsen said. “I have no plans to do anything else.”