Ryan Stream: A man with a mission 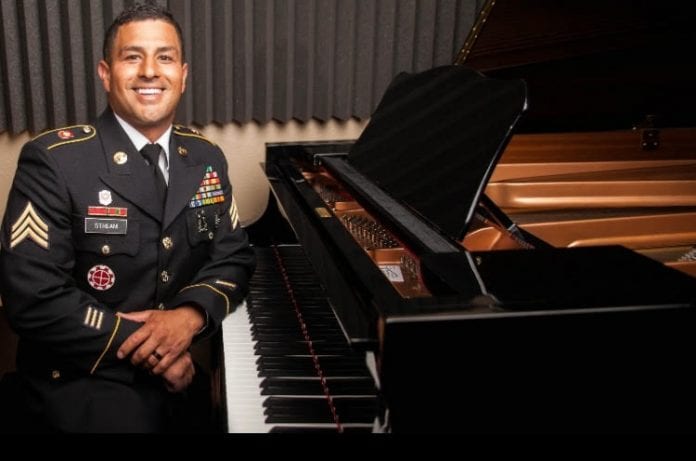 Every once in a while, you meet someone you become really impressed with because of their commitment to what they are doing and their ability to do it.

My husband, Ed, and I first met Ryan Stream on August 19, 2017, at the Demolition Derby at the County Fair in Spanish Fork. Ryan followed the flag into the arena on a trailer while playing a piano. Ryan sang the national anthem and then sang a song to pay tribute to Jim Louder, who has been the announcer for the derby from the beginning.

The next time we saw Ryan he was giving a presentation at a convention in Provo. The theme of his remarks was homeless to hero. He stressed the fact that we are the authors of our own story. He talks about sleeping in homeless shelters, foster homes, being adopted, addicted to drugs, going to jail multiple times and then changing his life by serving our country and deploying to Afghanistan two times.

Here is his story in his own words.

My name is Ryan Andrew Stream. I am a 27-year-old husband, father, motivational speaker, musician, soldier, high school football coach, and I also work fulltime at a plant called Materion in Delta, Utah.

I do anything and everything I possibly can do to make a difference. My brothers and I slept some nights in a homeless shelter and stayed in different foster care homes. One by one we were separated from one another feeling lost, alone, scared and anything you can possibly feel as kids. Our biological parents loved us, but the choices and the decisions they made only led them to addictions, jail and prison.

After a few hard, sad, challenging years, and living in different states and different places, all four of us boys were reunited and adopted by the Stream family. This family from Huntington, Emery County never gets the recognition they deserve for changing the lives of three boys, then two years later being able to adopt our youngest brother. The Stream family already had six girls and one boy and were kind and loving enough to open their arms and home for four more.

The Stream family raised us to be righteous and to always place God first in all we do. During high school, I joined the military because I wanted to make a change, and I wanted to make a difference. After returning home, I started to work in the coal mines and shortly after that started to attend college.

I had just received my $20,000 sign on bonus and was making $25 an hour working in the coal mine at the age of 18. I was more successful than anyone my age and most people older than me. I felt like I had life by the horns, and I did not need to listen to my parents or anyone who tried to give me advice. At the age of 19, I moved up to Orem, Utah and started to get in a lot of trouble. I went to jail multiple times and got addicted to drugs. Soon I was homeless and sleeping in my car because of the bad choices that I had made.

I changed my life and was able to serve my country twice in Afghanistan. Our mission was to find bombs placed on the road and to clear the route before any and all personnel to pass. Our year-long mission was very dangerous – mentally and physically draining. We deployed 32 soldiers in my platoon and 23 of the 32 soldiers were blown up by an IED.

I was diagnosed with two mild traumatic brain injuries, hearing loss, and PTSD. I remember crying alone on a bench one night because I was not sure I was going to make it home alive. I was 21 years old, and I did not want to die.

In July of 2011, I did not return home with everyone I deployed with. I married my best friend and finished one semester of school before being deployed to Afghanistan for the second time in 2012. After this deployment, I returned home and met my eight-month-old daughter, and I started a life with my wife.

It was very hard for me to transition back into the real world. I was waking up in the middle of the night and searching for my weapon. I felt like I was under attack. I was always on edge and very aggressive. I started to make bad choices once again, and consequences soon followed.

I can happily say, in front of the 28 audiences I have performed for this year, I have been to 38 counseling classes, and I love them. My wife has been a great helping hand, and she loved me enough to give me and our marriage a second chance.

The most important part of life is family. I feel like I can do anything with them by my side. I will prove to the world that you can change and that you can make a difference. Change your mind, and it will change your life, even if nothing else changes. Change the people you hang out with. The outcome of your life is based on the decisions you make. We are the authors of our story, and only you can write the book of your life.

I am currently traveling around speaking at school districts, universities, troubled youth and adult group homes, youth firesides, and state prisons. I opened for Alex Boye and other well-known artists and motivational speakers. I compose my own music and share my story through the lyrics.

It is interesting that Ryan had never been around a piano before he was adopted by the Stream family, and he does not read music, but he composes music and writes lyrics. He plays the songs over and over until they are imprinted on his brain. His music is a passion for him and his motivational speaking is his mission to help others. To learn more about scheduling a presentation with Ryan Stream email him at ryan2_stream@gmail.com or call 435-253-1868.

Businesses that Want to Help Students – Tools for Schools