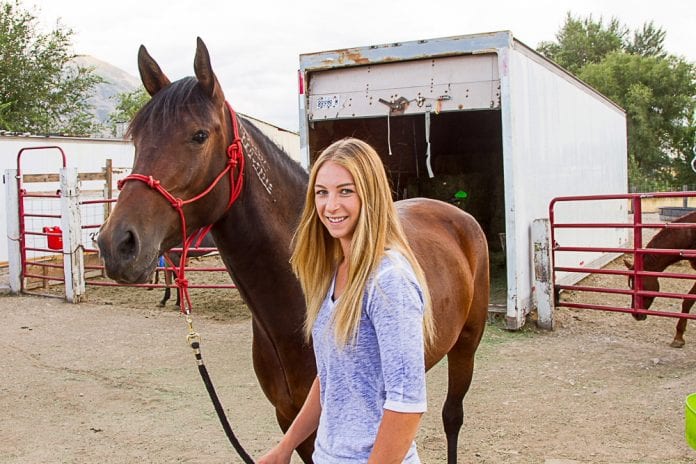 The July issue of Serve Daily had an article on wild horses in the west desert of Utah. Bryan Bussian wrote to us that his daughter, Chyrah, has adopted and is training a wild horse from the Bureau of Land Management (BLM). After a 100 day training period, this horse will compete with domestic horses in a skills assessment in November. The event titled “Impact of the Horse” is a partnership between the BLM and Sage Creek Equestrian Center. This is the rest of the story of wild horses in the western United States. The Wild and Free-Roaming Horses and Burros Act of 1971 provides for protection of established herds ofhorses and burros. The BLM estimates that Utah has 3,600 free roaming or wild horses in 24 herd management areas. These horses are referred to as “Mustangs” (male or female) and not a specific breed, but a mixture of breeds that have co-mingled over many years on the open rangeland. In order for the rangeland to support the herd, the size of the herd is managed by the BLM by rounding up and removing some of the mustangs and corralling them for adoption.

The Bussian family of Mona are horse people. They have been passionate about horses all their lives and that is the way they have raised their six children. They were on horseback before they walked. Their youngest daughter, Chyrah, who just turned 20, has trained quite a few horses in her young life and adopted a mustang from the BLM. During the day Chyrah works as a processional rider for Young Living Farms. She had been working with the draft horses and is now training for the jousting event. Chyrah is an amazing woman.

Chyrah’s horse is four-year-old mare named Legend that had been in captivity for two years in Delta before being adopted. Quite a few requirements and regulations had to be met to establish that the horse was being adopted into an adequate and safe environment. The BLM has specifications for the corral and even the horse trailer.

This adoption comes with a catch. Chyrah has just 100 days to train the horse for a competition event to be held in Heber comparing mustang and domestic horses.That sounds like quite a challenge. First you have to get the mustang comfortable being around people, cars, motorcycles, school buses and a saddle. When asked what was the first thing she did with the horse, Chyrah said she wanted to be the first to put the bridle on to start building a relationship. At the time of our visit, she had been working with the horse for 43 days from an hour or more a day, depending on what training exercises they were doing.

Next, a smaller red ball was brought out that the horse had not seen before. Chyrah and her mother played with the ball without disturbing the stance of the horse. Chyrah then rode her horse up onto an old tractor tire filled with dirt. The horse turned around and then backed off the tire. This was a pretty impressive demonstration of a tamed mustang for domestic riding.

The “Impact of the Horse, Domestic vs. Mustang Challenge” that Chyrah and her mustang mare “Legend” are preparing for will be held November 10 and 11 at the Wasatch Events Center in Heber. Billed as an event to demonstrate mustangs cannot only hold their own, but give the domestic horses a run for the Championship. After the eventthe BLM horses will be sold at auction. Chyrah has the option to bid on Legend.

Asked if she wanted to buy Legend she said, “Probably not. I can’t buy every horse I train.” If you have any interest in horses, or western history, this will be an interesting event to follow. You can learn more about the event from their Facebook page “Impact of the Horse, Two Worlds, One Event.”