November Business of the Month: SESD 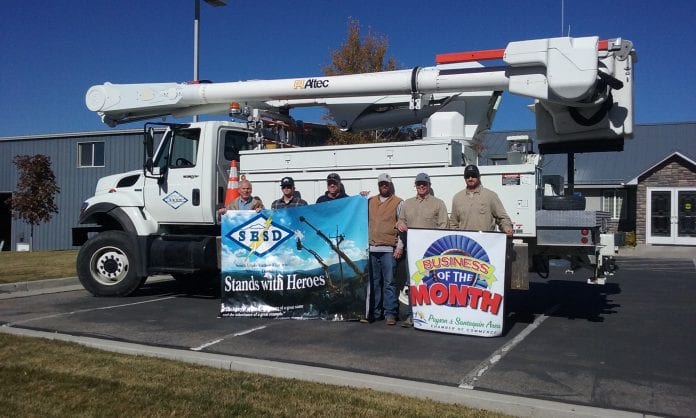 The Payson & Santaquin Area Chamber of Commerce would like to congratulate our November Business of the Month. We get many great nominations for the Business of the Month but few compare to the great strides that South Utah Valley Electric Service District (SESD) have put forward to be involved not only in Chamber functions but especially in the community in which they serve. SESD has is a great example of what the Chamber looks for in the businesses selected to receive the honor of the Business of the Month.

SESD has always been community focused; Public Power for the people of South Utah County. The Board of Trustees has made a commitment to their neighbors, to provide reliable, cost-effective, and efficient power – at reasonable rates – and to support their cities, towns, and communities in their efforts. Recently, SESD has stepped up its community contributions and involvement.

SESD participates in the Chamber events; recently hosting and facilitating an on-site networking luncheon at their headquarters in Payson. The Lion’s Club named SESD Office Manager Jennifer Hatcher as “2017 Lioness of the Year” and SESD has played a key role in the Lion’s organization; donating a Samsung Galaxy Tablet for the Payson Library Teen Summer Reading Program that is running in conjunction with the Million Pennies Lion’s fundraiser and offering labor, materials, and equipment for the restoration of the Lion’s pavilion in Memorial Park.

SESD has also been instrumental in providing innovative power solutions at Maple Dell Scout Camp, partnering with the Boy Scouts of America to fund multiple utility line extensions and power projects throughout the camp. One of SESD’s customers recently earned his Eagle Scout award with the help of SESD’s Line Crew and Service Technicians; working together, they were able to construct Pole Tower Osprey Nest Roosts. Protecting our wildlife and keeping the power on – – without birds on the wire!

The Chamber will be celebrating with SESD on Tuesday, November 7 at 12:30 p.m. in their Payson facility and would like to invite the public to join us as we present them with the November Business of the Month award.