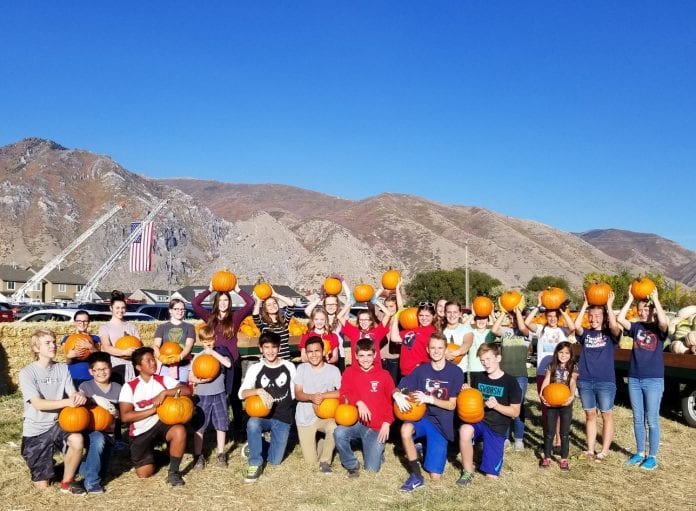 SPRINGVILLE, Utah — More than thirty students from Springville Junior High School volunteered at Jaker’s Pumpkin Patch on Tuesday, October 10, harvesting gourds for a community service project. The students, who belonged to chapters of the PTSA, Student Council, and National Honors Society, brought in almost two dozen wheelbarrows of produce. In gratitude for their service, Jaker’s awarded each student a pumpkin — not to keep for themselves, but to pass along to someone in need.

“This was a great way for the kids to learn to work, and also to pay it forward,” stated Tess Jones, PTSA President and organizer of the event. “They can donate their pumpkins to friends who are being bullied, struggling with financial issues, medical issues or just in need of cheering up.”

Despite over an hour of hard labor, and the grime and battle scars to prove it, the students wore genuine smiles as they cut the gourds free, piled them into wheelbarrows, then carted them away. “It feels great when I help people lift their burdens,” said eighth-grader Ella Unguren. “I know that I’m making their life easier.”

Several of the participants’ younger siblings joined the SJHS crew. Among them were Brookside Elementary students Levi Palmer and Madoc Jones — both of whom have joined the junior high’s PTSA organization despite their younger age — indicating that the school should enjoy an even brighter future of community involvement and service.