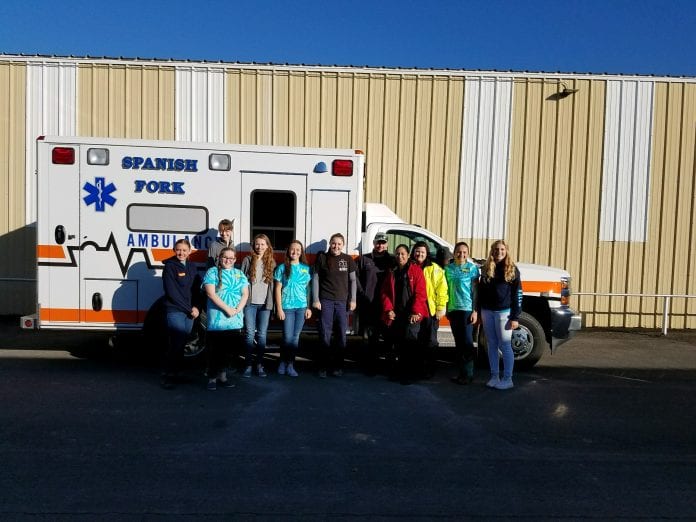 r The Spanish Fork and Salem Youth City Councils teamed up to hold an appreciation breakfast for community First Responders on November 11, to show their gratitude for those who care for city residents. “The Spanish Fork Youth City Council has always wanted to show our appreciation for our city’s Police Officers, and First Responders. We thought putting on a breakfast to show that appreciation would be a great way to acknowledge and personally thank our first responders. They do so much for us. It’s time to give back,” said Kiera Allen, the Service Officer of the Spanish Fork Youth Council.

Around 41 members of the Spanish Fork and Salem police, fire and ambulance departments attended the breakfast planned and executed by the youth in the two communities.

Jace Ballard, Spanish Fork Youth City Council Mayor, said, “We spent about 40 hours planning the first responders breakfast, which included, shopping, making posters, cooking some of the food, finding the best prices, (Maceys and Circle V meat helped us to accomplish this service project and stay within our budget) meetings, and much more. We had about 50 youth helping at the breakfast for the 4 hours that it lasted, including Salem’s youth city council.”

Salem City Police Chief Brad S. James said, “We live in a wonderful area and are blessed with the best youth around.  The breakfast that our youth provided allowed us to not only sit down and eat with our youth but, to get to know each of them on an individual basis.”

James felt this event helped improve the relationship between first responders and the youth in the community. “They found out that I was once just like them and that I faced a number of issues and challenges that they are currently facing. Our youth also found out that as a police officer I’m faced with many challenges in my career.

“That by working together and doing our part all of us can make our communities a better and safer place to live.  The youth that I had breakfast with now have a connection with me as a police chief and can feel comfortable coming into my office or when they see me on the street to discuss their problems and concerns or to just say ‘Hi’,” he said.

Members from the Youth City Councils from both cities also enjoyed the experience. “My favorite thing about the breakfast was being able to get to know all our first responders a little bit better, and personally thanking them for all they do. It really was cool getting to spend some time with them,” Allen said. Salem Youth City Council Mayor Whitney Graham said, “Something I learned was first responders take their job very serious and most didn’t stay a super long time so that they could be back, ready for the call.”

Ballard said the Youth Council has done some things to thank First Responders in the past, but this year wanted to be able to interact with them more. He said it could only be accomplished with the communities working together.

“We knew when we started the project that it was going to be bigger than anything we have ever done before, but we wanted to do it anyway. I know that there was no possible way that I could have done this alone. The only reason that this project was accomplished was because we worked together and were willing to put in a lot of time and effort. We understood how important this project was and we were not willing to give up on it. At times it was stressful and a little intimidating knowing how much work we were going to have to put into it but now that it is over, I would choose to do the same over and over again,” he said.