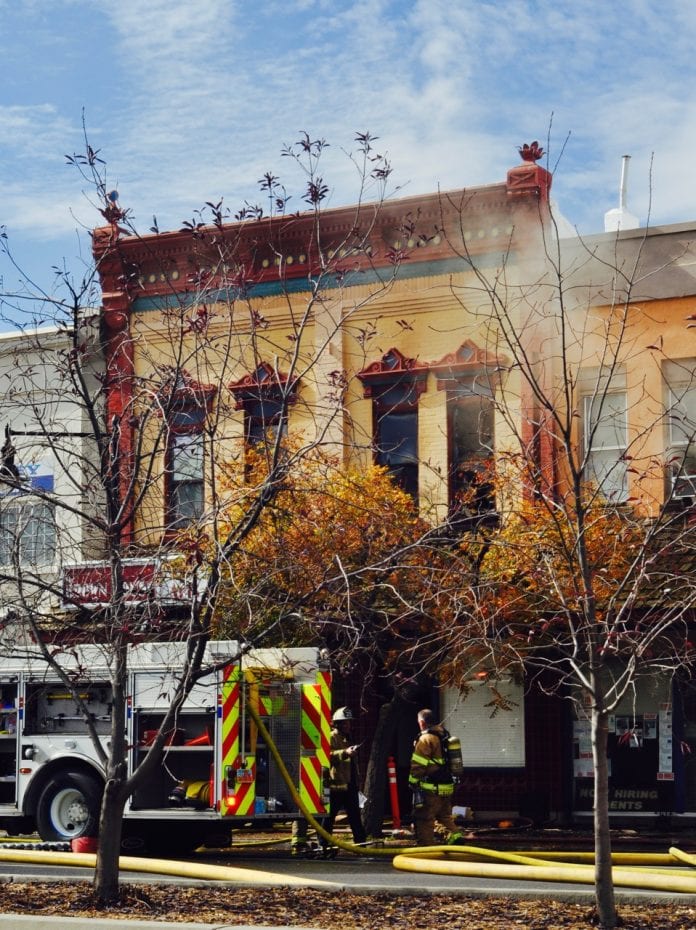 r On October 19, 2017, a spark burst into fire in the second-floor apartment of two precious historic buildings on Springville’s Main Street. The cleaning lady who had just left the middle of the three upstairs apartments may have nicked a wire that arched to the gas heater.

The two antique buildings—though well cared for—are over a hundred years old. Flames exploded, and tore a hole through the floor big enough to fit a Volkswagon bug. All of the offices below were gone—including the Brown House of Fine Arts, the small art gallery of the building’s owners: Bill and Marilyn Brown.

When the fire broke out, the Brown family was in Salt Lake City at the wedding of their granddaughter, who, by the way, had rented one of the apartments and moved new things inside. The wedding guests were enjoying their slivers of cake when the text came through: “Do your grandparents know their gallery is on fire?”

Luckily, five expert local fire departments, Provo, Orem, Spanish Fork, Payson and Springville, came to the rescue. One fire chief courageously braved the fumes to pull out some of the artwork and store it in his SUV. But the three upstairs apartments, the offices below and about half the paintings were now ashes.

When grandparents Bill and Marilyn Brown and their children found themselves picking through the grime to discover if anything could still be used, they told onlookers, “It’s just an opportunity to create more paintings. After all is said and done, it’s the act of creating that brings joy.”

Bill and Marilyn carted what was left of their work to the 55 and older condo downtown where they plan to spend the winters away from the snow-packed Hobble Creek Canyon. They hung their work in the garage. “Now we can have a garage sale,” Marilyn laughed. “How lucky we are compared with the fires that swept away so much in California! Now we can sympathize with them.”

“Losing precious objects is still just losing things,” thespian Bill Brown remarked.  Though he has won awards painting, his main hobby has been live theater. He produced eighty-six productions from 1996 to 2005, and has played several times in “You Can’t Take it With You.” “It’s true we don’t take anything with us!” Marilyn states. One of her favorite stories is about the auction of Einstein’s effects. A small locked box was carved with the words: “The secret of happiness.” Legend has it that bidding for the box reached over a million dollars. When the box was opened, a small piece of paper carried the words, “Money doesn’t buy happiness.”

“How true,” Marilyn continues. “We were underinsured because the buildings are so old. But we were heartened to find that some of our ‘necessary’ paintings scheduled for publication were still in fair shape. I rubbed the soot off of my painting for THE BLACK CANARY novel about a girl whose family lived in Helper, Utah, in the 1920s mining town, and washed down the portrait of the Belgian girl who escaped the Nazis in WWII for the book, THANK YOU FOR THE DAISIES. Most of Bill’s mountain scenes were luckily intact. We had also sold several of our best works just two weeks before the fire: ROAD TO COVERED BRIDGE, FAIRVIEW BARN, and ENTRANCE TO ZION. Bill sold his award winning CELESTIAL BEGINNINGS. Thanks to those special purchasers, the paintings are spared!

“So we are grateful! We know it’s not the money that buys happiness,” Marilyn emphasizes. “It’s creating something good that brings happiness.” As the author of over eighteen published novels and regional histories, her writing keeps her creating, along with the Brown family: six children, sixteen grandchildren and four greats. “The joy of life is accepting the challenge of creating a good family, or creating a business, or creating new ways to help others. Creating is forever. It’s a godlike activity. I’m grateful for all of the ways good people create.”

And, by the way, she and Bill are already busy doing more paintings.