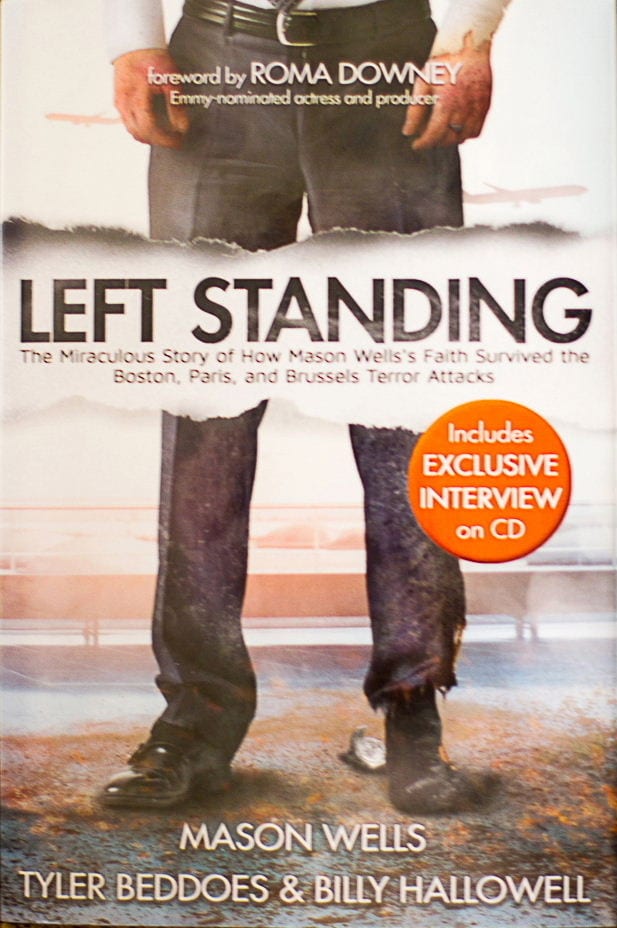 r Left Standing is the title of a recently published book about Mason Wells’s emotional and physical survival after three terrorist attacks that occurred while he was in the cities of Boston, Paris, and Brussels. As a newspaper reporter, I was invited by Plain Sight Publishing, a subsidiary of Springville based Cedar Fort Publishing, to interview Mason before the book was released for sale. The interview was by telephone appointment since he is in his first year as a Midshipman at the U.S. Naval Academy in Annapolis, Maryland.

When Mason was 15, his mother ran in the 2013 Boston Marathon and he and his father were rushing toward the finish line when the two bombs detonated. While no one in the Wells family was physically injured, Mason was emotionally shaken by the carnage he witnessed which resulted in three deaths and 264 people injured. After high school, Mason accepted an LDS mission assignment in France and was in the country November 13, 2015, when multiple terrorist attacks in Paris killed 130 and injured 368 innocent people. Another emotional shocker. On March 22, Mason went to the Brussels Airport to drop some missionaries when a bomb went off and he was seriously injured. Seventeen were killed at the airport that day.

In the interview with Mason, he said the book describes the traumatic events in his life and his personal effort to deal with them. He said he initially did not want to write a book, but his friend Tyler Beddoes thought it might help others cope with challenges they face. When asked about his target audience for the book, he said it is written for everyone, mid-teens through adults. It deals with faith and hope as antidotes to fear and adversity. He said, “having hope is the pathway to happiness.” Today he has permanent scars, but no disabilities. He was in a Belgium hospital for six days and spent two months recovering at the University of Utah Hospital.

In writing the book Mason Wells wants people to know that they should not be afraid to do things. He wants to help people become better persons and believes that each of us has the power to change our own lives. He also stated that we should be grateful for the trials in our lives because they enable us to become a stronger person.

Mason Wells always wanted to be a Marine officer like his great-grandfather, Lt General Lawrence Snowden and his grandfather, Colonel Steve Snowden. Last year Mason Wells was nominated to the US Naval Academy by both Utah Senators and Congressmen Jason Chaffetz. He was sworn into the Class of 2021 this past summer.

I learned all of this from Mason before I was able to get a copy of the book to read. What amazed me was his very open portrayal of his challenging emotions as he dealt with the dramatic events in his young and relatively naive life. It is both fascinating how he deals with the questions of faith and the common “why me God” question. The book is written in an easy reading conversational style, in large print. It would have been a quick read if I hadn’t sent so much time underlining key sentences or passages. The book can be summed up from the following passage from Page 4, “This book is about my journey of faith, hope, and Love: a faith in God and the general goodness of humankind; a hope of better days to come, and a desire to extinguish the fear of hate with the power of love.” I read this book on a flight to Florida and was moved to give it to a traveling companion. I have now bought another copy and I plan on buying additional copies for Christmas gifts.