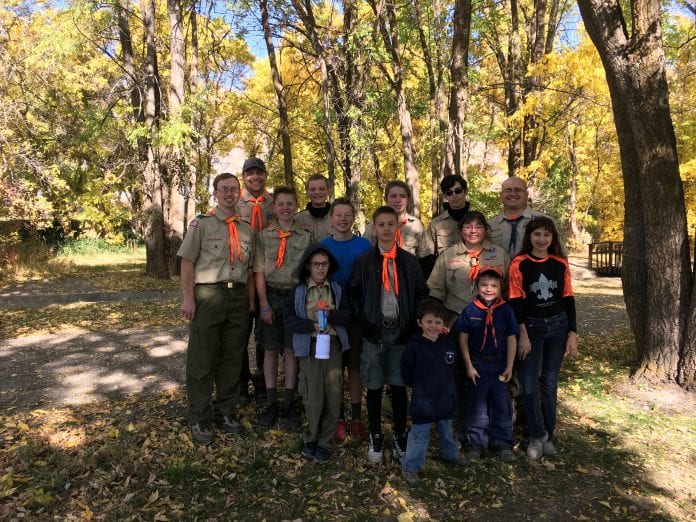 One Springville Boy Scout Troop is making great efforts to focus on living the Scout Oath, especially the promise to “… help other people at all times,” as they make it a point to serve during their monthly campouts.

Troop 1456 of Springville took time to help during their most recent campout on November 10 at Diamond Fork Campground in Spanish Fork. They moved big logs that were in the way of where campers set up tents, cleaned up garbage around the campsites, and cleaned along the nature trail.

This is nothing new for the troop, however. The group of 13-14-year-olds, currently 11 strong, have made an effort since this past May to not only go on a campout every month of the year but to serve others while they’re camping.

Springville resident Felice Clements, both the Scoutmaster for the troop and the Cubmaster for the affiliated pack of boys ages 6-10, says that the troop is unique in this area as it is a community troop, and Clements and her heavily-involved husband, Evan, are “here to serve everyone in the community, no matter their religion.”

Excited by the recent changes within the Boy Scouts of America organization, Troop 1456 will begin admitting girls in 2018. Girls will be in a separate den from the boys, but will be in a combined pack. Beginning in 2019, there will be a separate troop for girls who are ages 11-18.

Chris Herker of Springville, whose son was involved in the Cub Scout pack for many years and has since joined the Boy Scout troop, has nothing but praise for the experience, saying “He learns the points of the scout law weekly, he puts what he has learned into action monthly on the campouts, and also earns the funds to pay the monthly dues.”

The good the troop is doing also spreads into civic learning opportunities, as some of the scouts in the troop are involved in Junior Leader Training, which, Herker says, ensures that the boys, “are the true leaders of each other in this program.” In this training, the scouts themselves came up with a mission statement, deciding to focus on service and outdoor-oriented activities. Clements says that the campouts and other outdoor-oriented activities are fine with her, as “They’re much more behaved when they’re outside than when they are in.”

Clements enjoys getting to meet so many diverse families through her work with the troop and although it warmly welcomes anyone who is interested in joining, one important requirement is that the families of the scouts become involved. Not only do the families help Clements, but once every three months, the troop and the pack do an activity together. Last month, the troop helped the pack with a carnival that they put together.

God expected Zion to be built in Utah