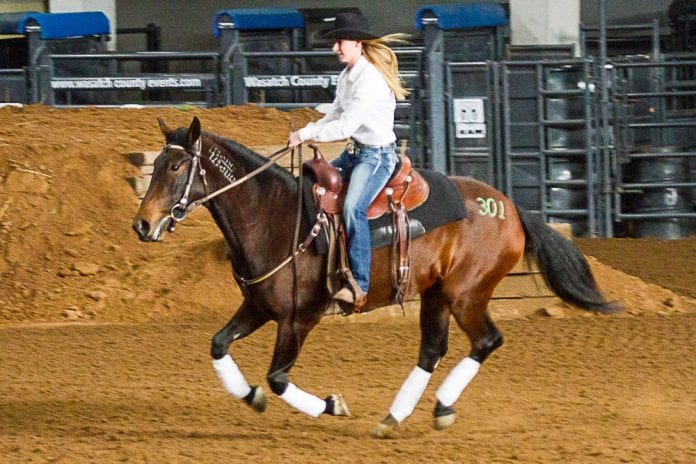 In the October issue of Serve Daily, we did a story on 20-year-old Chyrah Bussian from Mona who adopted a Bureau of Land Management (BLM) Mustang for a 100 day training period ending in a competition event between domestic horses and horses raised in the wild. That event, organized by Sage Creek Equestrian and the BLM, was held in Heber City November 10 and 11, 2017. On the first day of the event competing horses and trainers had to demonstrate their ability to deal with mountain trail riding and ranch duties. The judging of the first day narrowed the number of horses competing down to five horses in the domestic division and five horses in the Mustang or wild horse division for the second day of competition. At the end of the second day adopted Mustangs would be sold at an auction. Chyrah and her horse, Legend, ended the first day as one of the top five Mustang competitors and a competitor for day two. This final ride in the competitive event was a freestyle exhibition of the trainer’s design and music selection in the open arena. The horse and trainer were judged on technical, artistic and horsemanship/partnership.

The audience reacted to Chyrah’s ride on the Mustang she named Legend with loud cheers and clapping. When the awards for the top Mustang and trainer where announced Chyrah and Legend placed second. Many people in the audience were surprised and wanted to know the points earned for the first and second place winners. It then came over the loudspeaker that First Place earned 96 points and Second Place earned 95.5. That is pretty close and a lot of people expressed that Chyrah and her horse did the best ride. This is what happens in close competitive events and this is where good sportsmanship comes into play. One man in his 70’s who has been around horses for just about that many years said it was obvious Chyrah has spent a lot of time with her horse. Her training was not a rush job. He pointed out, “Did you notice how she gently touches the shoulder of her horse while she is riding.” He went on to say he thought she was gifted. Everyone witnessed the relationship between horse and rider. We have to also remember that this horse was in a BLM corral after being removed from the free-roaming herd on the open range.

The final vote for Chyrah’s horse was shown in the auction. Legend sold for an amazing $4,300. The second highest bid for a horse was $1,500 and the other three Mustangs auctioned off where $1,400, $700, and $200. That is another way the people’s voice was heard as to the value of Chyrah’s horse training ability.

Congratulation Chyrah and we are proud of our young lady from down the road in Mona.