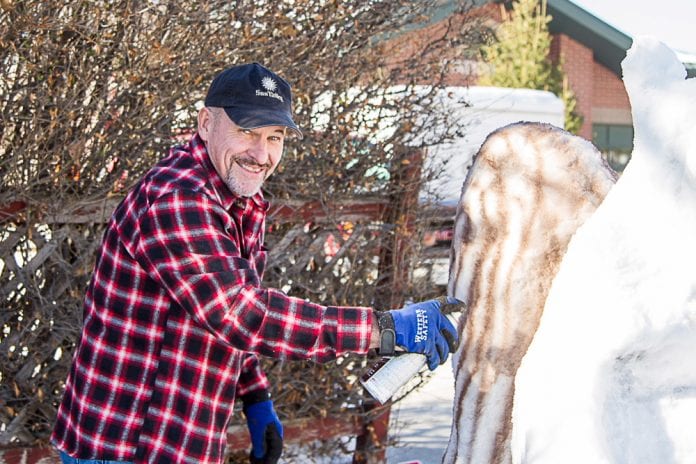 r I had seen pictures of Jerry Gardner’s snow sculptures but had never personally seen them until I made an appointment for an interview. I arrived early and got out the camera for a photo of a huge squirrel built around his mailbox. It looked pretty intriguing and I started taking a few photos when Jerry showed up and explained that he had just finished repairing the sculpture because of the warm weather and he was going to start painting it. He explained that he does the snow sculptures to cheer up people with the wintertime blues that occur this time of year. I introduced myself as his one o’clock appointment. 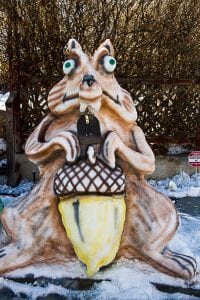 Jerry has been making sculptures every time it snows for about twenty-five years. His subjects are usually popular cartoon or mythological characters. He explained that he is an artist who loves the creative process and he wants to make people smile. While we were visiting several people driving by his residence at 400 South Canyon Road stopped to thank him for his marvelous creations. It has been difficult this year to scrape up enough snow to make the sculptures. Fortunately, Jerry lives next to the fire substation and uses the snow off their driveway to supplement the snow available in his own yard. His sculptures are constantly changing as temperatures and snow conditions changes. He will spend three to eight hours, sometimes more creating a sculpture. It is obviously a work of love and a passion for art.

As Jerry and I visited he remained busy with various colors of spray paint to bring character to the bland white six-foot squirrel. Between the squirrel’s front legs is Jerry’s mailbox. Between the squirrel’s hind legs is a giant acorn. The funny thing is I didn’t see the acorn in the snow white sculpture until he painted it. The hand-molded snow, painted makes an amazing piece of art that should bring a smile to everyone’s face. By the time you read this the squirrel will probably be gone, but Jerry will have created something else.

Jerry Gardner was selected as Springville’s Resident Artist during the 2017 Art City Days. You can find his art work at the Strap Tank Brewing Co., Sidecar Café and Legends Motorcycles, and La Casita Restaurant in Springville.  Jerry also has a passion for restoring antique cars and Utah mining history. It was a wonderful experience visiting with Jerry and as a writer, I want to talk with him further about mining history in the area. Jerry is available to do custom art work for homes and business and his phone number is (801) 376-2895.