Robert Monson and his WWII Story 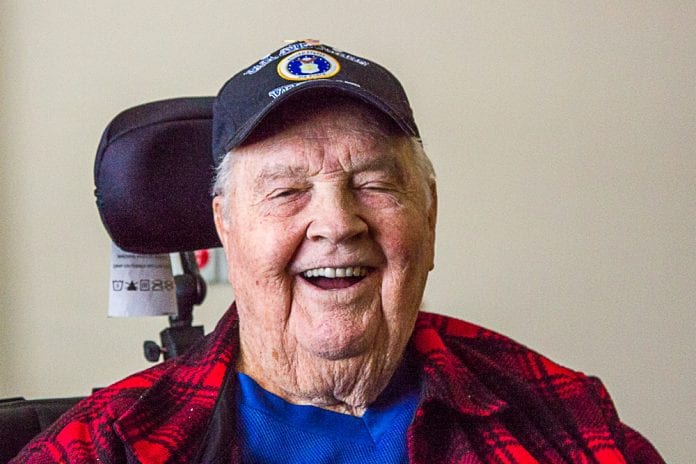 r A Resident of the Bennion Central Utah Veterans Home

Motivated by a spirit to get involved and help the country Robert (Bob) Monson enlisted in the Army Air Corp in January 1944 while still in high school. He wanted to be a pilot but ended up going to gunnery school. That earned him a position as nose gunner on a B-24 heavy bomber of the 15th Air Force. Operating out of Italy after that country had been secured by the ground forces of General Patton, they were flying deep into Nazi Germany.

As nose gunner, Bob liked to joke that he was the first on the scene and what a view of the action. The view, however, bothered him a lot. Tears came to his eyes when he talked about bombing German cities 74 years ago. “He felt bad when his plane dropped bombs because he knew women and children were down there”. It took him a few missions with being shot at to realize the ”Nazi government invited him to the party.” He still carries a lot of emotion about his war experience.

On his fifteenth mission over Nazi Germany on March 24, 1944, Bob’s B-24 was damaged so badly by enemy fire that the pilot ordered the crew to bail out. Other than a quick lecture, he had no experience with a parachute. All 9 crew members bailed out of the crippled airplane. As Bob floated down toward the German countryside people were shooting at him. He had been instructed that his chance of survival would be greater if he left his sidearm behind on the airplane. Once on the ground he and his other crew members were taken to the Stalag 17 prisoner of war (POW) near Krems, Austria.

Bob Monson was held captive in the POW camp for 2½ months before the war came to an end. Three or four days before the prisoners were released, they heard gun and mortar fire, but the German guards would not talk to them. Finally, General Paton’s troops arrived and the German guards disappeared. After a medical examination, he finally was on his way back to the United States. Bob entered a career of operating oil refineries for Chevron in California, Utah, and Hawaii. Today he is suffering from a leg injury incurred during the war and has an electric wheelchair to get around.