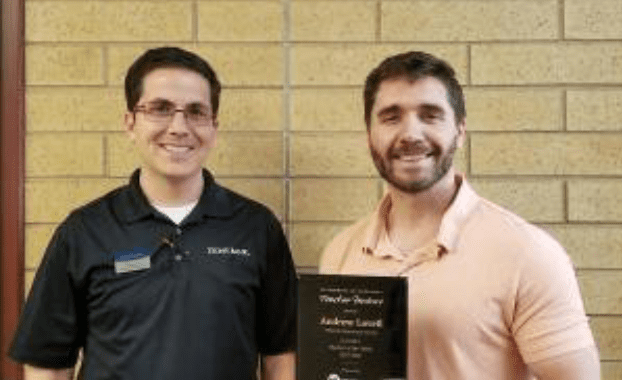 r By Lana HiskeyrKSL NewsRadio and Zions Bank are proud to honor Utah’s best teachers with the KSL Teacher Feature Awards! Since 1994, Teacher Feature has highlighted outstanding teachers throughout the State of Utah. Winning teachers are announced every Tuesday morning, September through June, on Utah’s Morning News with Brian & Amanda.

Andrew’s nominator, Ashley Lovell, said, “Yes, I am his wife but let me tell you why my husband is the best teacher I have ever known in three unbiased paragraphs.

“First, my husband teaches to inspire students. On the first day of school, he commits students to memorize and live by the “The Road Less Traveled” by Robert Frost. This poem transforms the way students think throughout the year and has encouraged students to form and run their own service projects in the community and to go above and beyond what is asked of them. Two years ago his class alone raised near $3000 for the Utah Foster Care. Last year he challenged his class to raise even more. His class fundraised $4000 for the construction of libraries in Uganda and then he spent his own savings to travel to Africa and build the libraries for 5 weeks in June of 2017. He took pictures, used Facebook Live, and took videos so that he was able to show students the impact of their project from beginning to end.

“Second, my husband is not a worksheet teacher. Every test, PowerPoint, and handout he uses is personally made and tailored to the needs of his students. His math PowerPoints include real-life sixth grader problems, situations, and includes students names to make learning more “real”. He challenges students to ask, “Why do we need to learn this?”, “When will I use this in real life?”, “Why is this important to me?”

“Third, you will never find an environment that is more “safe” then within the confinements of his classroom. In his class, students are praised and rewarded for sharing their mistakes and errors in the classroom. Students thus benefit from learning from one another’s mistakes and he reports that these errors are rarely made again. He also uses his personal time, before, during, and after school to create clubs and councils to make sure all students have a place where they fit in (this includes Dungeons and Dragons club, Westside Association of Magicians, and Student Council).

“The other day a student had his dad pull over as he jumped out of the car to greet him as we were taking a walk in the neighborhood. He lives and teaches by the following motto, “People don’t care how much you know, until they know how much you care”. His students not only know that but they feel that.”

Each winning teacher is honored with a plaque from Zions Bank, an overnight stay at Anniversary Inn, a gift certificate for dinner at the beautiful Roof Restaurant at Temple Square and a pair of season tickets from Hale Centre Theater!

All winners are also invited to attend an end-of-year banquet at the Joseph Smith Memorial Building in their honor. In addition, one lucky teacher will win the grand prize 2-year lease on a new car courtesy of Burt Brothers Tire and Service.

A panel of judges from Zions Bank, the State Office of Education, and KSL NewsRadio judge the hundreds of nominating letters. The letters can be sent in by anyone – students, peers, former students and even relatives. If you would like to nominate a deserving teacher, go to www.kls.com/?nid=191.

PCT Review: A Night on Broadway