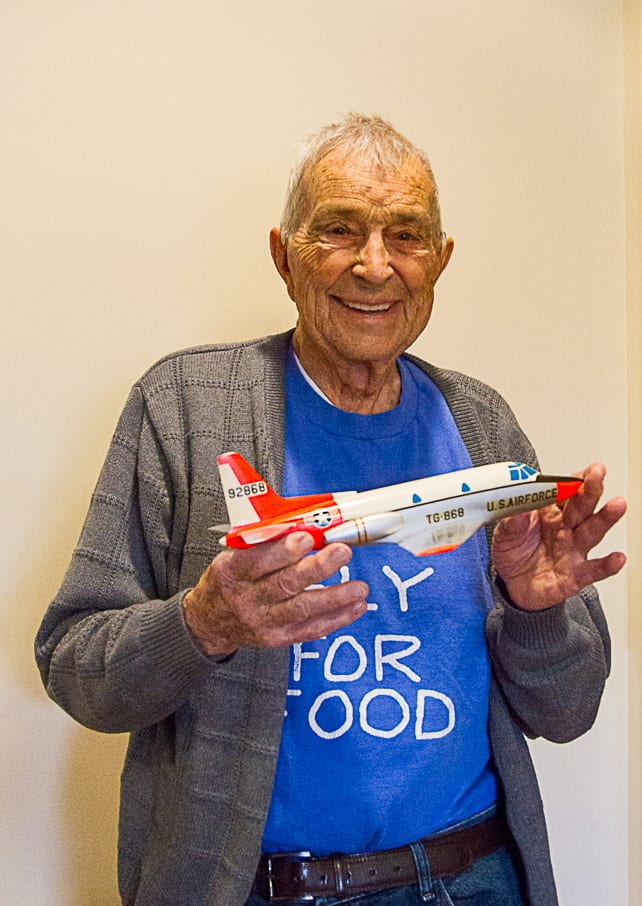 r When I first met 90-year-old Roland Mower at the Mervyn Sharp Bennion Veterans home he was wearing a tee shirt that proclaimed “I Will Fly for Food.” I commented about the shirt and Roland replied, “Yes I did and yes I will.” Being an aviation enthusiast and a flight instructor I knew I was in for an interesting experience.

Roland was born in 1928 in Fairview, Utah. In 1944 he and several schoolmates joined the Navy. He was in the 9th grade and 16 years old at the time. When asked why they joined the Navy he said they thought the white hats were cute. Roland was sent to boot camp in San Diego. He was then trained as a gunner and assigned to the Heavy Cruiser USS Pensacola as part of the Northern Japan Islands Invasion Group. Armistice with Japan formally occurred on September 2, 1945. Roland and his crewmates went ashore as part of the early occupying force and were told to take no guns or weapons with them. He was initially concerned about this but found the Japanese people polite and he discovered they made good beer. He also commented that after a few weeks the school children were wearing uniforms to school.

In September 1946, he was transferred from the USS Pensacola to the USS Columbus. While in Long Beach, California he witnessed the test flight of the Howard Hughes Spruce Goose on November 2, 1947, which he found pretty exciting. Roland’s Navy service included a tour of the Panama Canal Zone and then assigned to the Battleship USS Missouri for a cruise to Lisbon, Portugal, France and Algeria. He received an honorable discharge from the Navy December 17, 1948.

Shortly after his discharge Roland married a young woman that he met in Florida. Wondering what to do with his life and encouraged by his wife Nona he enrolled in Chicago’s Industrial Training Institute studying to be an Aircraft and Industrial Instrument Technician. In 1949, Roland and his wife moved to Salt Lake City for a job because he wanted to get back to his home state of Utah. He took a GED test and scored high enough to be considered a high school graduate. Next, he was counseled to enroll in the University of Utah as an Air Force ROTC student. He graduated with B.S. in Geography and was commissioned as a 2nd Lieutenant in the Air Force Reserve on June 1, 1955. On September 13, 1955, was inducted into the Air Force.

Roland was told that he had the aptitude to be a pilot and that became the next step in his career graduating from pilot training October 31, 1956. He was assigned to the 3510 Flight Training Wing in the 3511 Training Squadron as a T-39 Sabreliner instructor. Air Force VIP flights were a later part of his duty and one of the most memorable occurred on October 27, 1961, when he flew Vice President Lindon B. Johnson from Ft. Worth to Washington, DC. Graduate education continued in the Air Force and Roland eventually earned a Ph.D. in Geography from the University of Utah. Roland and his wife were sealed in the Salt Lake Temple in May 1963 before moving to Colorado Springs to teach at the USAF Academy to teach for three years. To continue his Air Force career he volunteered for Viet Nam in 1967 where he continued to fly the T-39 on VIP transport missions. Roland has many fascinating stories about this era in his life.  After retiring from the Air Force Dr. Roland Mower taught at the University of North Dakota and Embry Riddle Aeronautical University. An interesting life for a farm boy from Fairview, Utah