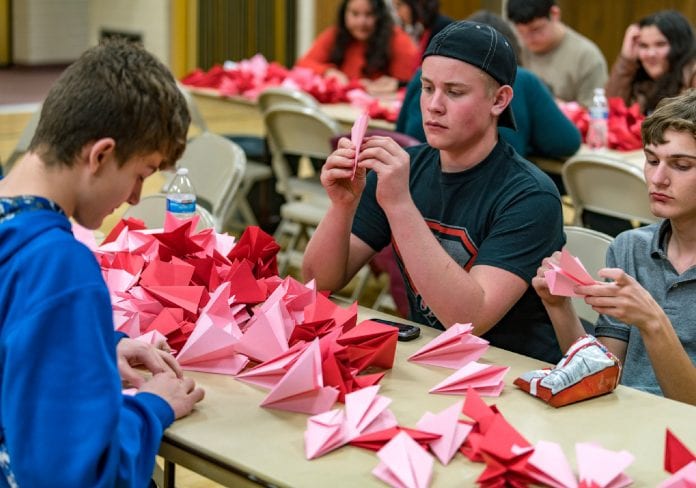 SPANISH FORK — Several Utah County schools are joining forces to do something special for students at Marjory Stoneman Douglas High School as part of Utah Kindness Month. They will be making 3,600 origami flowers to send to those affected by the Florida school shooting.

Spanish Fork High School will be hosting an origami party on Wednesday, April 11, from 4:00 to 9:00 p.m. The entire Spanish Fork community is invited to participate.

One of the event organizers, Sterling Brinkerhoff said, “If I were to build 3600 of these flowers myself, it would require more than 900 hours to get it completed. United schools and communities together can get it done quicker and have a much stronger impact for everyone involved. I am so excited to see everyone who wants to build these flowers. They are not the easiest flowers to make, but to me they are some of the most beautiful.”

This effort began shortly after Valentine’s Day as tragic news from Parkland Florida blanketed headlines across the country. Mr. Glen Zobell, Science Teacher at Timpanogos High School was inspired to do something to heal those who were hurting across the country. Zobell served a LDS Mission to Japan and had a strong background in origami. As you look around his classroom, you will see many complex and beautiful examples of his amazing paper art.

As heartbreaking news from Florida eclipsed local heartwarming stories, local newspapers highlighted a Junior at Spanish Fork High School who wanted to help students and staff know that they are respected, remembered and loved. Sterling Brinkerhoff, with help of hundreds of volunteers and sponsors, ensured that every student and staff member at Spanish Fork High School received an origami flower and Valentine’s Day treat, donated by Mrs. Calls Caramels and V Chocolates. The flower design was an original created by Sterling in 5th Grade, representing a lily instead of a rose. A heart folds out with a hidden message of hope and encouragement. The lily has represented faith, wisdom and chivalry since the 14th century.

Mr. Zobell contacted Sterling after reading his story to see if together, they could do something similar. Within days, two schools were united in an effort to share that same message with students and staff at Marjory Stoneman Douglas High School.

As Sterling was trying to connect with someone to receive the flowers in Florida, Mr. Ryan Petty was in Utah during the last week of the 2018 Legislative Session. Father of one of the shooting victims, he initiated a declaration that April be designated as Utah Kindness Month- in memory of the goodness of his daughter. Sterling contacted him and was able to start setting dates to build flowers for Florida. Mr. Petty was excited to hear about the effort and wanted it to serve as an example to others around the world.

This project is a significantly larger folding project than Sterling’s recent one for Valentine’s Day. With 3600 origami flowers, supplies and shipping was a growing concern on a limited budget. Paper supplies have been generously donated by The Paper Store and More, located at 1786 South State Street in Orem. Shipping and copies have been kindly donated by the UPS Store in Springville and Spanish Fork.

Mr. Zobell invited several school clubs and organizations to help in the effort. They will be hosting an origami party April 9 at Timpanogos High School from 6:30- 9:00 p.m.

Brinkerhoff said, “It was incredible that Mr. Zobell contacted me to do something on this scale. I am so impressed with him and his enthusiasm. This is going to be a lot of fun.”