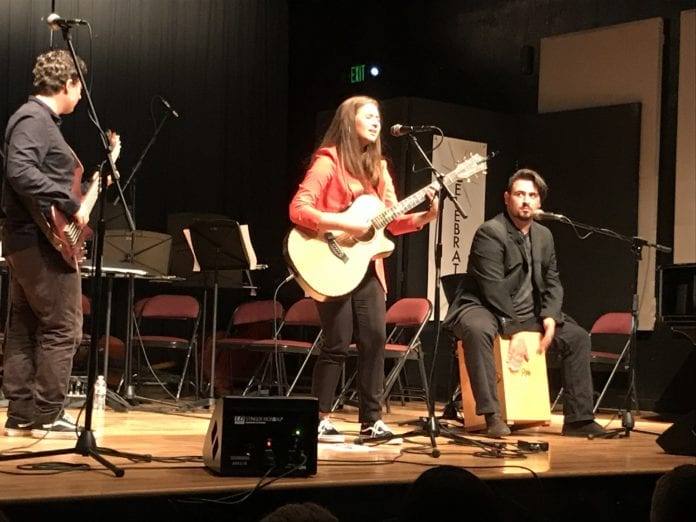 r Spanish Fork’s Angelus Theater was packed to capacity on Wednesday, October 3 as it hosted the second ever Celebrate the Arts concert. The event, presented by Prime Mortgage Lending, Inc. and the Driggs Mortgage Team, promotes the arts in South Utah County.

But Gregg Driggs, from Prime Mortgage Lending, Inc. also wanted to convey to those in the audience that more kids can and should choose the arts as their career. Contrary to what some might think, “there’s money to be made in the arts, and that’s what we want to show with tonight’s concert.”

Katie Dellenbach Higley, of Spanish Fork and from American Idol fame, opened the night on the piano, playing two original songs before a last-minute decision to add a little song her grandmother used to sing. The song emphasized the concept that all the love that you give eventually returns back to you. It was the perfect segue way to the crowd favorite “This is Me” from The Greatest Showman.

Headlining the event was the band Delphi Freeman, from San Francisco. The sibling group sings indie pop. In September 2017, Gregg Driggs was traveling in the Bay area when he and his family happened upon Delphi Freeman playing in Ghirardelli Square. Their need for chocolate was quickly forgotten as they listened to the soulful group for over a half an hour. The Driggs and Delphi, James Lyford, and Luke Lyford struck up a friendship that has resulted in their paths crossing several times this past year.

The nineteen-year-old Delphi Freeman, who was recently named International Artist of the Week by Pure West Radio, engaged the crowd with several songs, all original and having a touch of a folkish vibe. Some particularly memorable tracks included “Air You Breathe,” “Who Am I,” and “Infinity,” as well as “Lost Coast,” which Delphi wrote around the time her grandmother lost both her brother and husband.

The cost of admission to the event was free, but a donation box collected funds for the Spanish Fork High School and Junior High arts programs.