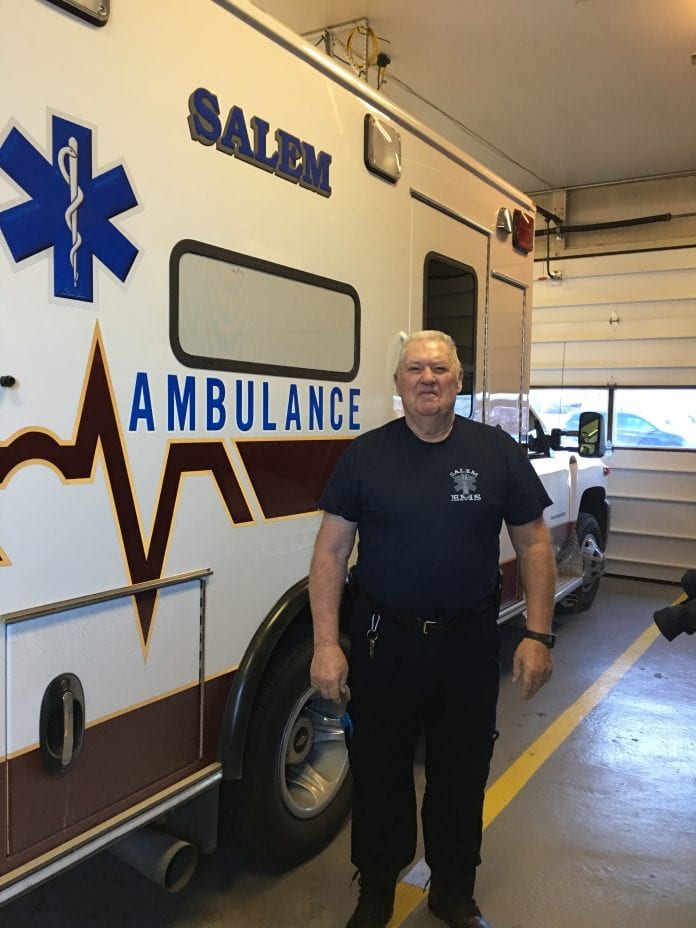 Erman Stone began his life of public service back in 1962, after graduating from Springville High School and serving a two-year mission for the Church of Jesus Christ of Latter-day Saints in New Zealand. Joining the Army National Guard, he was assigned to the 116th Engineers’ unit where he served as a platoon sergeant and heavy equipment mechanic. Service with the Guard took him to deployments in Korea, Panama, and Honduras. Here in Utah, his unit built airfields and responded to floods and disasters. To build and maintain skills, they helped the State of Utah with projects from school football fields to public sports facilities.

Perhaps not thinking he was doing enough for the community, Erman joined his hometown volunteer Mapleton Fire Department in 1964. Things were different then. The various state certifications later required for firefighters were unknown. Training and tactics were a little simpler — “Put the wet stuff on the red stuff” and “surround and drown.”

Moving to Salem in 1972, Erman brought his enthusiasm, on-the-job knowledge, and skills to the Salem Volunteer Fire Department where he served in various capacities, including chief for four years. The Salem Fire Department coverage area extended from the Salem/Payson border to SR-6 and over the hill to Birdseye and Indianola. The Fire Department brush truck, pumper and tanker (a repurposed gasoline tanker) were housed in a garage next to the old house that was the city office. Erman served on the building committee that raised the new Fire and EMS facility. Call-outs were a little different then. Fire and rescue calls were received via telephone at the Fire chief’s house. He then “flipped a switch” that activated a siren at the station. Fire personnel hearing the siren would then respond to the station.

As modern-day EMS systems became established in the mid-70’s to 80’s, Salem lagged behind, being serviced by either Payson or Spanish Fork. Seeing a problem with the delayed response from other cities, several Salem residents accepted the invitation from Spanish Fork in 1987 to become local first responders. These Salem residents, trained by Spanish Fork EMS personnel, would respond to the scene of a medical emergency and begin treating the sick and injured until the Spanish Fork ambulance arrived for transport. Erman Stone was the first SEMA captain.

Within a couple years, the crew decided it was time to become a full-fledged ambulance service. A “very experienced” older ambulance was rescued from an auto auction in Benjamin and the arduous process of becoming a certified ambulance service was completed. This included increased certification of personnel from first responder to EMT, to Intermediate and Advanced EMT, state licensure of the association, and recruitment to ensure the ability to respond 24/7.

While Erman is quick to point out that the whole process was accomplished by the combined efforts of many association members, as captain during the process, he was ultimately responsible for shepherding the transition. His experience in the process enabled him to help Mapleton in starting their ambulance service.

Erman has served as captain of SEMA off-and-on for over half of the 30+ years he has been with the association, including the last eight years. He is the last of the original SEMA personnel. His collateral duties as captain have included assignment on the Salem Emergency Management Committee, Planning Commission, billing and payroll for SEMA, and monthly meetings with Utah County EMS and South County EMS captains. In his spare time, he was the Salem City Cemetery caretaker after his retirement from the Guard in 2001.

With all this going on, Erman and his wife, Maureen, managed to raise a successful his-hers-and-ours clan of nine, including a daughter, Michelle, who went into the Fire and EMS service in Arizona. Maureen’s patience and sacrifice in supporting Erman cannot be overlooked. In 2017, they were appropriately honored together as grand marshals of the Salem Days parade.

Years of Fire and EMS calls in Salem has resulted in Erman remembering many, many houses and locations based on his responding there with his fellow firefighters and EMTs to serve his neighbors in the desperate moments of their lives. He has seen terrific advancements in equipment, from respirators to defibrillators, and significant advancements in the scope of practice for EMT’s, from fairly-basic first aid in the early days to life-saving administration of emergency medicines.  Erman will tell you the greatest reward has been being part of a team that made a difference in real people’s and real family’s lives. That includes, over the years, seeing people going about their business in town who, a few weeks earlier, had been brought back from the brink of death.

Chief James, Salem Public Safety Director said, “Captain Erman Stone was instrumental in organizing Salem’s first emergency medical association. His selfless commitment and dedication has benefited so many in times of medical emergencies. His numerous sacrifices in serving others are greatly appreciated. He will be missed.

After over 46 combined years of service to the Salem fire and ambulance services, Salem owes a great debt of gratitude to Captain Erman Stone. But, he’ll tell you it’s been a privilege for which he will be forever grateful.