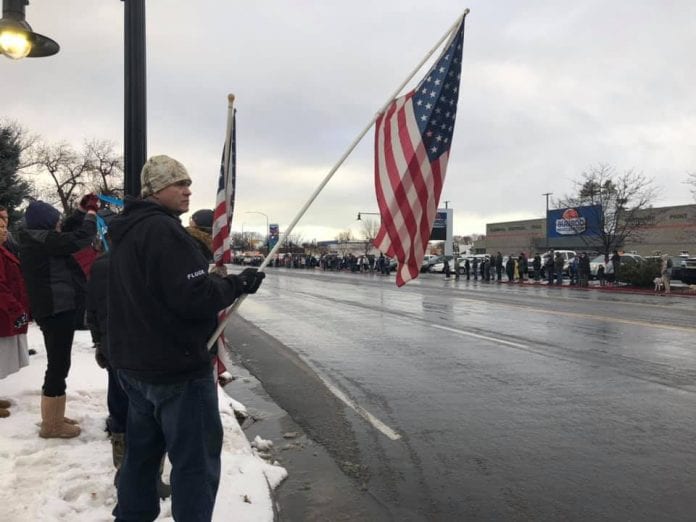 r Hundreds of people lined the street in Springville Sunday as a police-escorted procession for fallen Provo officer and Springville Resident, Joseph Shinners went through Springville to Wheeler Mortuary. They came in a show of respect, love and support for Shinners’ family and fellow law officers. Shinners, a 3-year veteran of the Provo Police Department, was shot and killed Saturday night during the apprehension of a dangerous fugitive. He leaves behind a wife, Kaylyn Swanson Shinners and a 1-year-old son. The couple both graduated from Springville High School in 2008 where Shinners was a member of the soccer team.

During a Sunday press conference, Provo Police Chief Richard Ferguson said, “Joe Shinners was intelligent. He was honorable. He was hardworking. He was decent in every single way.”

Residents expressed their gratitude and shared memories on Springville City’s Facebook page. Connie Sudweeks Crandall posted, “Rest in peace Officer Shinner and may God wrap his loving arms around your family and bring them peace. This is such a tragedy. God bless those who put their lives on the line every day to protect us from evil. Thank you for your service!”

“It was incredible to see all the citizens there to show their support for our local hero who put his life on the line to protect us from the bad guys. (That was basically my explanation to my children.) My husband said he was an awesome hockey teammate as well. What an honor to be present for the procession today,” said Alicia R Pawelek

A GoFundMe account has been set up for Officer Shinners family.