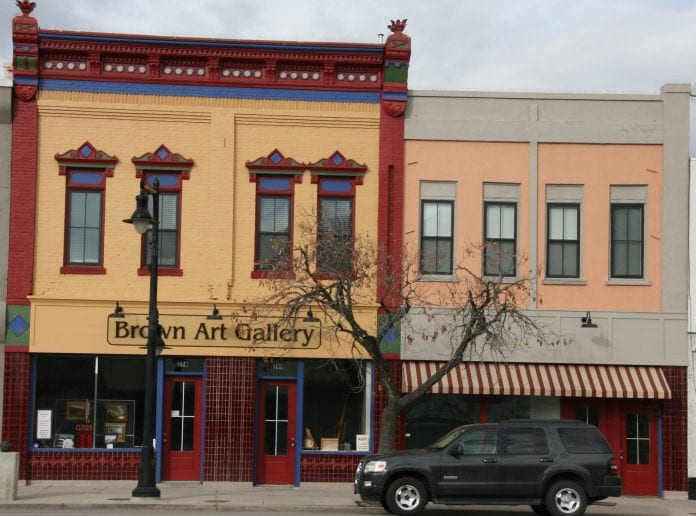 The wedding in Salt Lake City was just getting over on that beautiful fall day October 19, 2017, when a text came through informing everyone in the wedding party that Grandpa and Grandma Brown’s historic buildings on Main Street in Springville were on fire. This five-alarm fire destroyed 80% of the interior space and left three apartment tenants homeless. Our brave firefighters were able to save the historic main street. They went the extra mile to save and preserve as much of the original artwork of the Browns as they could.

The Browns have owned these historical edifices for nearly 20 years. During those years they were occupied by three apartment tenants on the second floor. The main floor commercial space housed the Bill Brown Realty, a building contractor and the Brown House of Fine Arts. The Browns also allowed the space to be used as a “green room” and rehearsal space while they managed the Villa Playhouse Theater next door from 1996 to 2005. Some sixteen months from the day of the fire, the restoration work is nearly finished, and the buildings are restored to resemble the era in which they were originally built. The large wooden awning and modern signage were removed, all doors replaced, and new Victorian exterior features added.

These historic structures have been accepted by the National Park Service to be listed in the register of historic buildings. The North building, 262 South Main, known as the Moroni Miner Block, was built in 1892 by Moroni Miner. He used it as a grocery and meat market. It has housed a variety of businesses over the years: a bakery, candy store, drugstore, cobbler, and many others.

The South building, 274 South Main, known as the Hyrum Straw Block, was built in 1900. It was originally a one-story building. A second story was added sometime in the early part of the twentieth century. Both buildings were acquired by Thomas E. Child who later sold them to Ellen R. and Maud Peterson, who owned them until 1977. Over the years the building housed a bakery, operating in 1908. In 1925 the building was occupied by a cobbler and a barber. Throughout the 1940s and 1950s, the building continued to house a barbershop.

The newly reconstructed buildings will be occupied by the three apartment tenants upstairs with an insurance firm in the office space on the main floor. The balance of the retail space is occupied by the Brown Art Gallery and Studio.

Bill and Marilyn Brown, last year’s winners of the Scera’s Star Award for a “Lifetime Achievement in the Arts,” have been painting together for more than ten years. Their works of landscapes, portraits, and abstracts are showcased and sold in the gallery along with work of other local artists. The Browns, in their late seventies and early eighties, are determined to make each day count as they continue to make strides in their passion for the arts.