In Our Back Yard: Jurassic National Monument 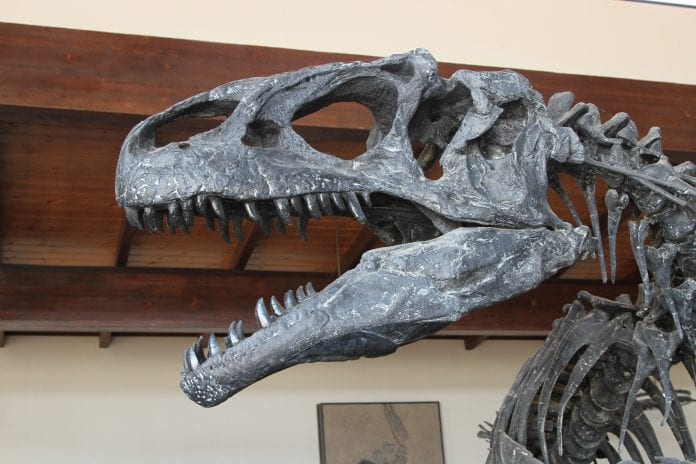 r This new National Monument in Utah was signed into law March 12, 2019. This local dinosaur quarry south of Price, Utah has been known as the Cleveland Lloyd Dinosaur Quarry administered by the Bureau of Land Management.

First discovered by paleontologists in 1927, the quarry has the densest concentration of Jurassic period bones ever found. As of 2018, it was reported that one egg and more than 15,000 bones belonging to at least 74 dinosaurs have been removed from this site. Bones from this site have been assembled as skeletons are on display at over 60 museums worldwide. It remains a working quarry. The quarry was first recognized as a National Landmark in 1966 and the Bureau of Land Management’s first-ever visitors center was opened in 1968. The current visitor center was opened in 2007. Now, this dinosaur quarry has become Utah’s ninth National Monument.

Why the dense concentration of bones at this specific location is still a mystery with scientists debating several theories. What is known is that this was a death trap that captured many dinosaurs. Many of the bones are from Allosaurus, one of the largest meat-eating dinosaurs of the Jurassic era. Skeletal remains of plant-eating Stegosaurus, Camarasaurus, and Camptosaurus dinosaurs have also been excavated. Two previously unknown dinosaurs, Stokesosaurus clevelandi and Marshosaurus bicentesimus, which are small meat-eating dinosaurs have been identified by paleontologists. If you or your kids have any interest in dinosaurs this is an amazing place. The road to the Cleveland-Lloyd Dinosaur Quarry/Jurassic National Monument is not on the way to any place, it must be your destination. The easiest route to the Cleveland Lloyd Dinosaur Quarry is to drive south out of Price, Utah, on Utah Highway 10 for about 12 miles to the junction with Utah Highway 155. Follow UT155 to Elmo and follow the signs for the 13-mile gravel road drive through the Desert Lake Waterfowl Reserve to the dinosaur quarry.

Once you arrive at the quarry you will find a small Visitors Center and a short walk to a metal building that overlays a quarry exhibit. There are a couple of self-guided walking trails to add to your educational experience. Picnic tables are available for your outdoor lunch. There is no camping or lodging at the quart site.

The Dinosaur Quarry is only open one weekend in April if you want to visit and that weekend is April 18-21 from 10 a.m. until 5 p.m. During the month of May the quarry will be open every Thursday, Friday, and Saturday from 10 a.m. until 5 p.m. A $5 fee is charged for adults (16+), unless you have a National Park Pass. Kids are free and what a fun place it is to take the kids.